April 6 – If Chelsea are sold for £3 billion (€3.6bn, $4bn) it would not only be the highest ever sale figure achieved by a football club, but would eclipse the highest number ever paid for a spoirts organisation anywhere in the world.

The current record sale is the $3.35 billion Joseph Tsai paid for the acquisition of the NBA’s Brooklyn Nets and their home arena in 2019. The £790 million paid by the Glazer family to buy the shares of Manchester United is the highest figure spent for a football club. The Chelsea £3 billion is 10 times the amount the Saudis paid for Newcastle United – a team playing in a bigger stadium.

So would £3 billion be a fair price for the club. Football finance specialists Football Benchmark argue that while on face value Chelsea would be hard pressed to justify that price, a unique set of circumstances have driven the number up.

Football Benchmark calculate that Real Madrid, Manchester United and Bayern Munich have all had enterprise values closer to €3.6 billion than Chelsea who they reckon have only ever reached a €2.3 billion enterprise value – and have actually been declining in value, for both covid reasons and because of the way Roman Abramovich ran the club as he put on-pitch success ahead of financial performance.

Andrea Sariotor, founder of Football Benchmark, points out that taking Chelsea’s net financial results over the past ten years, “they are the only club in this shortlist of elite clubs to have registered an aggregate net loss, while the other clubs successfully generated profits for their owners.” In contrast, Chelsea owe Abramovich £1.6 billion in loans.

Price and value are two different concepts, say Football Benchmark, listing a number of reasons why.

“The prestige of a club like Chelsea FC, the scarcity of clubs at such stature for sale, combined with the ego-driven desires of investors in wanting to own such a trophy asset are perhaps the biggest drivers for such an expensive quote, as the opportunity to purchase the reigning CWC champions comes around once in a lifetime.

“The Blues are under tremendous sell-side pressure, which under normal circumstances would drive the valuation down, but the abundancy of the potential suitors in tandem with the urgency of the bidding process inverses this effect.” 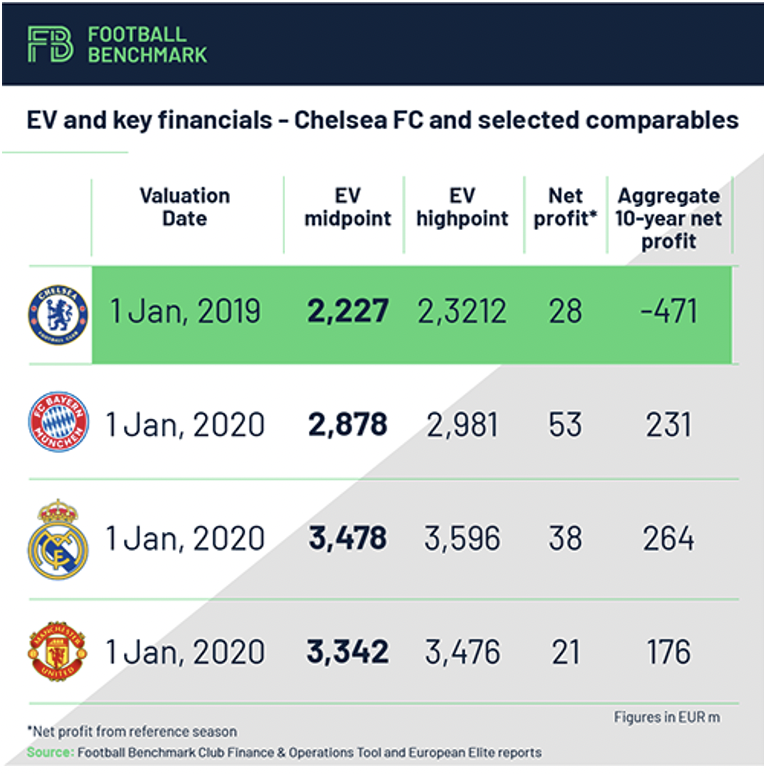 Add in factors like the ability to monetise Chelsea’s brand globally and the observation that all the four final bidders are backed by US money, there are the possibilities to “create specific synergies” with the club in “one of the cultural and economic capitals of the world”.

Football Benchmark also argue that in the era of financial fair play, if you want to play at the very top you now have to buy at the very top rather than buy somewhere in the middle and spend your money to get there – in reality the sums invested to do that might not much different if FFP allowed.

Football Benchmark also point out that while Chelsea are already one of the biggest clubs in the world, they still haven’t reached their full potential due to their current stadium limitations. Club figures club say that increasing the stadium capacity from 42,000 to 62,500 could allow new owners to boost annual matchday revenues from £70 million to £200 million. With a similar multiplier effect for sponsorships and other revenue streams.

With post-covid football economics leading expectations of a return to financial growth – the Premier League have already reported a 30% increase in international broadcast revenues and UEFA is showing an 11% increase in its club competition broadcast revenues – the time to buy could be now if this is the start of a new growth phase for the big clubs and big competitions. 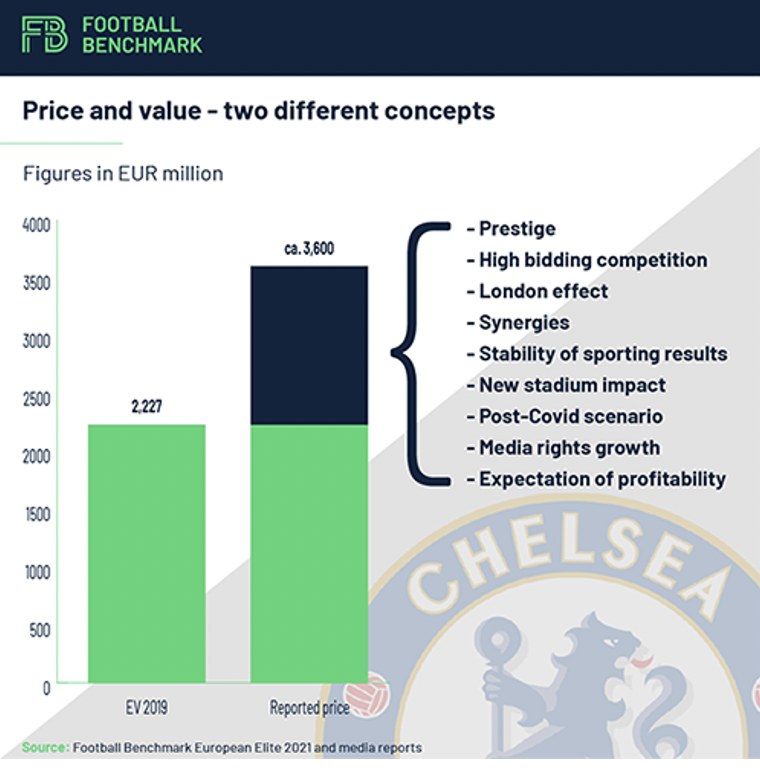 Even so, Football Benchmark concludes that “looking at the financial performance and expected cash flows, it is very hard to justify such reported price and return on investment for an investor, on the other hand, as explained above, externalities and market dynamics – possibly difficult to specifically quantify at this stage and unique to each investor – may drive up the price.”

And in any competitive bidding for a prize asset, there is the ‘big ego’ factor. The four consortiums on the final shortlist are all backed by American investment, are already in sports ownership, and all have the required egos.

For all of them money and egos don’t seem to be an issue.