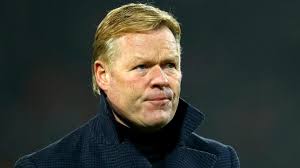 April 6 – Ronald Koeman is to return as Netherlands coach when Louis van Gaal leaves the role after the World Cup in Qatar, the Dutch FA has confirmed.

Van Gaal, who has long made it clear he will step down after the tournament, revealed last week he was receiving treatment for an aggressive form of prostate cancer.

“Proud to share that after the World Cup I will once again fulfil the role of national coach,” said Koeman who was in charge between 2018-2020.

Koeman (pictured), who has managed in England at Southampton and Everton, helped the Netherlands reach the Euro 2020 finals after they had missed the previous tournament and the 2018 World Cup, and also to the final of the Nations League, where they lost 1-0 to Portugal.

He left for what he described as his “dream job” at Barcelona in August 2020, but was sacked in October last year.

“I’m looking forward to the new collaboration,” Koeman added. “A little over a year and a half ago, I certainly did not leave the Dutch national team out of dissatisfaction.”