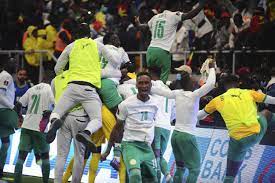 May 3 – FIFA has ordered Senegal to play one competitive match behind closed doors and has fined Senegal’s FA CHF175,000 for fan disorder at a World Cup playoff game, including shining laser pointers at Liverpool’s Egyptian star striker Mohamed Salah.

After Egypt and Senegal each claimed 1-0 home wins in their two-legged play-off for World Cup qualification, Salah was targeted by a number of laser pens as he blasted his penalty over the bar in the decisive shoot-out in Dakar, which Senegal went on to win.

Egypt lodged a complaint after their defeat, which came little over a month after the Pharaohs had lost the Africa Cup of Nations final on penalties to the same opponents, also claiming Salah was subject to racist abuse and their team bus targeted by missiles before the game.

FIFA said its disciplinary committee also looked into a pitch invasion by Senegal fans, an offensive banner and the national federation’s “failure to ensure that law and order are maintained in the stadium.”

FIFA has also hit Nigeria with a CHF150,000 fine and a one-game stadium closure after the country were eliminated at home by Ghana in their playoff.