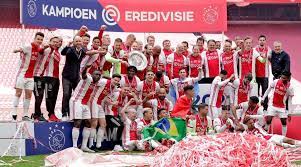 May 12 – Ajax have been crowned Dutch champions for a record 36th time following a resounding 5-0 victory against Herenveen, securing a direct ticket to the Champions League group stages.

It’s the third time in a row that the Amsterdam club have prevailed in the Eredivisie. Nicolas Tagliafico, Steven Berghuis and Sebastian Haller got on the scoresheet in the first half before Brian Brobbey and Edson Alvarez completed the 5-0 scoreline in the second half.

The league title brings to a close a turbulent season for Ajax after director Marc Overmars had to exit the club following allegations of harassment by female club employees.

“I have enjoyed the journey,” said ten Hag. “It was a beautiful era and I look back on it with great satisfaction. We have created a culture of winning. In recent weeks we have also been difficult to beat. It is now a lot about our character, although you do sell Ajax short with that: this season we have won two times against PSV and Feyenoord and we have seen that many young players can break through.”

With a direct ticket for the Champions League, Ajax is ensured of a €45 million pay day through a combination of bonuses, tv rights income and matchday revenue.  PSV Eindhoven finished runners-up and PEC Zwolle were relegated for the first time in a decade.