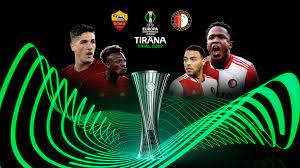 May 12 – UEFA president Aleksander Ceferin has defended the ticket policy for the final of the Champions League between Liverpool and Madrid in Paris this month as fans for all three club finals have scrambled to get tickets.

So great has been the demand that UEFA has issued a warning to the dangers of purchasing tickets on the secondary markets, though for many fans that is the only way that are now going to get into one of the three stadia hosting the Conference League, Europa League and Champions League finals.

The problem became acute almost immediately with the rush for tickets for the Conference League final in Tirana, Albania, by AS Roma and Feyenoord fans.

The Arena Kombatare in Tirana has a capacity of just 22,500 and indications are that AS Roma fans were the fastest to snap up the tickets with many Feyenoord fans complaining they had been left hanging by the UEFA ticketing system.

This has left many of them to look to alternative ticketing platforms where tickets are being offered for €1,000 and upwards.

UEFA warned that “third parties offering tickets on the internet are often not in possession of the tickets which they claim to have for sale, despite demanding exorbitant prices for such tickets.”

“The teams who have reached the finals have also received an allocation of tickets to their respective final and sales to the fans of the finalists are in the process of being carried out. Supporters of the participating teams are advised to contact the clubs directly for further information on the processes for the sale of tickets to their fans,” said UEFA.

While UEFA asked fans not to travel to cities for finals unless they had tickets, that is unlikely to stop the flood of people heading for the Champions League final in Paris.

The Stade de France will have a capacity of 75,000 for the showpiece match of the European club season, with both finalists receiving just 19,618 tickets while a further 12,000 were put on general sale, prompting criticism over the distribution from Liverpool fans’ group Spirit of Shankly and Jurgen Klopp. The rest of the tickets will be distributed to the UEFA ‘family’ and sponsors.

“Fans of both teams get 20,000 tickets each. If sponsors that pay 100 or more million euros sponsorship – of which 93.5 per cent goes to the same clubs – get some tickets, it’s part of a contractual obligation that we have.

“It’s the system that works, and clubs couldn’t function differently. For us, not much will change if all the tickets will be 10 euros, but it will change a lot for the clubs. A lot.”

It will be the third time that Paris’ flagship football stadium hosts the Champions League final after Madrid defeated Valencia 3-0 in 2000 and FC Barcelona edged past Arsenal 2-1 in 2006, but in a statement, UEFA warned about the “the dangers associated with purchasing tickets on the secondary market.”