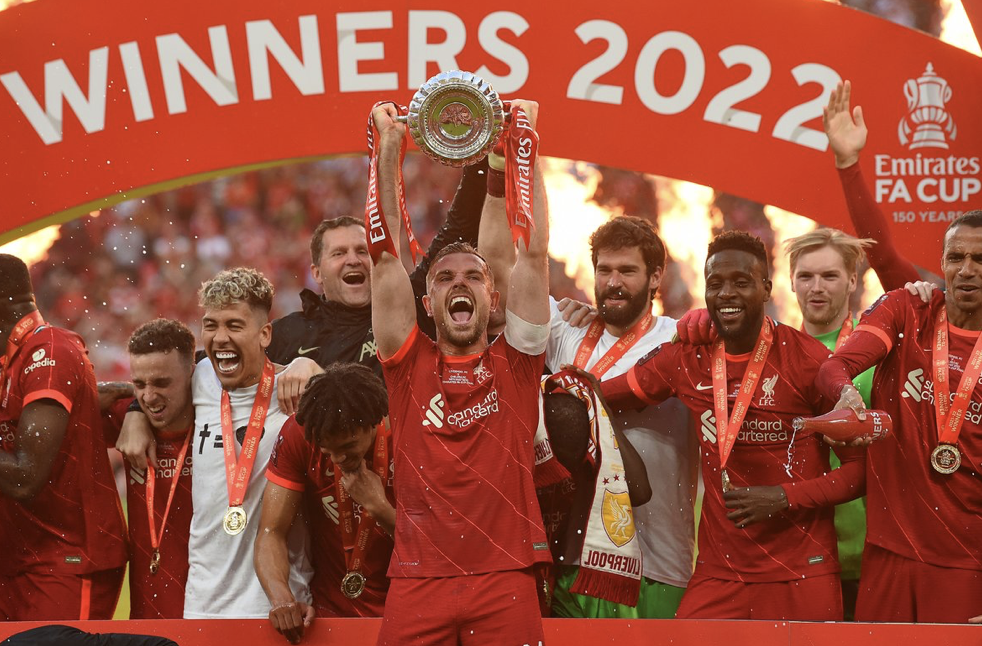 By Samindra Kunti at Wembley

May 15 – Liverpool’s quadruple dream remains alive after defeating Chelsea 6-5 in a penalty shootout in the 150th Anniversary FA Cup Final following a tense and draining 120 minutes.

Greek substitute Kostas Tsimikas became Liverpool’s hero, converting the decisive penalty after goalkeeper Alisson’s wonderful save from Mason Mount. The result condemned Chelsea to a historic third consecutive FA Cup finals after defeats to both Leicester City and Arsenal but kept Jurgen Klopp’s unprecedented bid for a quadruple alive. The Reds trail Manchester City in the Premier League and play Real Madrid in the Champions League final at the end of the month.

After the 90 minutes, the match descended into a war of attrition with both teams exhausted. In regular time, the final had not been a classic but offered enough goalmouth action and tension.

At a sun-drenched Wembley, English football celebrated 150 years of the oldest club competition in the world, but not without Liverpool supporters disrupting Abide with Me and booing the national anthem. English FA president Prince William was booed as well, all in protest over the failings in the Hillsborough enquiry.

The Liverpool fans had little to complain about immediately after kick-off.

On the front foot, Liverpool found the gaps and Luis Diaz proved a constant menace for Trevor Chalobah, but the number 23 failed to convert Liverpool’s best chance when clean through following an exquisite cross-pass from Trent-Alexander Arnold.

Chelsea’s forward forays were rare, but almost lethal against a vulnerable-looking Liverpool backline. Pulisic’s attempt dribbled just past the far post and then Alisson Becker produced a fine save to prevent Marcos Alonso from scoring.

The Brazilian injured himself in a collision with the Spaniard’s leg, but it was Mohamed Salah who needed to be substituted just after the 30th-minute mark, a concern for Jurgen Klopp with a fortnight to go until the European club final.

Chelsea flew out of the dressing after half time with Alonso driving wide and hitting the crossbar. Liverpool responded when Diaz, again, pivoted to target Mendy’s right-hand corner. In a tight-arm wrestle, no club ever seemed in full control of the final, but the intensity of the match gradually dropped. The action in front of the goalmouth didn’t relent: attempts from both Diaz and Andrew Robertson met the woodwork and the Colombian, the best player on the pitch, curled what would have been the winner just wide of the far post.

By now, both teams were shattered. And no matter the number of fresh legs, a goal in extra-time was always unlikely. The 30 minutes were a non-event. From the penalty spot, Tsimikas ensured Liverpool’s cup win since 2006.

Klopp called his maiden FA Cup win “out of this world” and did not seem too worried about potential injuries to both Salah and Van Dijk. He said: “I think they will both be fine.”