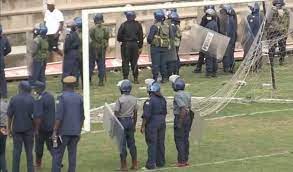 May 18 – Zimbabwe’s Premier Soccer League (PSL) has suspended all matches until further notice after the biggest domestic club game had to be abandoned because of fan violence.

The scenes at Barbourfields Stadium in Bulawayo included a supporter attacking a referee, perimeter fences being pushed over and the net of one of the goals being torn by Dynamos fans during their clash with Highlanders on Sunday.

Fighting broke out just after the hour mark after a Dynamo player was left with a broken leg after an opponent’s challenge. As fans, including families with children, tried to escape, the clashes spilled out on to the field of play, sending players running for cover.

Play resumed after 15 minutes but the ugly incidents occurred again at the end of the game when Highlanders took the lead. The match was then abandoned.

It was the second such incident, the first taking place in April during another match involving Highlanders when tear gas had to be used to disperse irate fans.

The latest ruling means there is practically no football in Zimbabwe at the moment since the country is still under an international FIFA ban because of government interference in running the game.

“We take this opportunity to apologise to all football loving fans, our sponsors and stakeholders. We hope to address these challenges before resuming football matches,” said PSL chief executive Kenny Ndebele.

The Zimbabwe Football Association (ZIFA) says it will investigate the incident “to identify the roots of the hooliganism so that we find a lasting solution.”