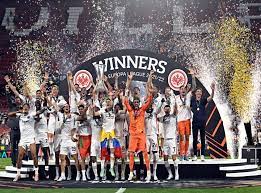 May 19 – Eintracht Frankfurt ended their 42-year European trophy drought on Wednesday by beating Rangers 5-4 on penalties after a 1-1 draw to lift the Europa League in a nail-biting final that will be remembered for the display of passion by both sets of fans in Seville.

Despite finishing mid-table in the Bundesliga, Eintracht were the better team over the first 90 minutes as they came from behind to equalise, only to cling on in extra time as Rangers grabbed the initiative and almost won the game right at the death when Kevin Trapp denied by Ryan Kent with a game-defining save.

The dangers of bringing on a substitute merely to take a penalty was exploited in the subsequent shootout as Aaron Ramsey missed for the Scottish side while Frankfurt netted all their attempts.

It was Frankfurt’s first European trophy since beating Borussia Mnchengladbach in 1980 in an all-German matchup in the UEFA Cup, the predecessor to the Europa League. Crucially, it also secures a first ever appearance in the Champions League next season.

Rangers, meanwhile, are still searching for their first European silverware since winning the old  Cup Winners’ Cup in 1972.

“It feels incredible,” said Trapp whose shootout save from Ramsey set off wild celebrations by Frankfurt’s “white wall” of fans behind the opposite goal.

“I’m trying to catch my breath still. For us, for Frankfurt, for the region. For the whole of Germany I think it’s a wonderful thing. To be able to give back to our fans this way is so special.”

Joe Aribo had given Rangers the lead in the 57th minute only for Rafael Borré to equalise 12 minutes later as Frankfurt went through the entire tournament unbeaten.

“We played 13 matches in Europe and we did not lose a single one,” said Eintracht coach Oliver Glasner. “We took it step-by-step and at the end we were rewarded. I have no words to express what I feel for the players.”

By contrast, the Rangers players and their massed ranks of fanatical supporters were left dreaming of what might have been.

“It’s the small margins when you get to this stage of competitions,” said a distraught Rangers captain James Tavernier. “It was in our own hands but we conceded that goal and then Trapp makes a great save. We are all just devastated.”

“You have to score those, especially in the last minutes,” he said. “With penalties it’s a lottery. We have to move on. We have a big game on Saturday in the Scottish cup final.”