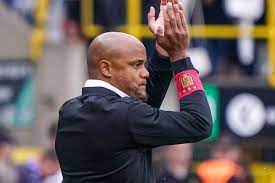 May 26 – Vincent Kompany has departed Anderlecht after three seasons at the helm without winning a prize. He is shortlisted to become the next Burnley coach.

Manager of the Brussels-based club since 2019, the former Manchester City captain was given free rein to impose his philosophy, but he had to abandon his rigid possession-based style for a more pragmatic and realistic approach, which led to a ticket for the qualifying rounds of the Conference League.

Last summer, Dutch club Vitesse however eliminated Anderlecht 5-4 on aggregate, one of many disappointments throughout Kompany’s tenure. His team also lost the Belgian cup final against AA Gent and succumbed four times across the season against crosstown rivals Union, who were the revelation of the season in Belgium and finished runners-up behind champions Club Brugge.

Kompany remained upbeat and labelled the season a success while also stressing that his squad remained a very young one. The Anderlecht hierarchy didn’t share Kompany’s positive assessment of the season and the club and coach have now parted ways.

Club CEO Peter Verbeke wants to implement a five-year plan to steer the Brussels-based club back to a more healthy financial position.

In a statement, Kompany said: “Today only one feeling prevails: I am proud that I was able to start this new chapter at the club of my heart. I have now been a player and a coach of RSC Anderlecht, but above all I remain a loyal fan.”

The former defender might not be long without a job. He is reportedly on the shortlist to succeed Sean Dyche at Turf Moor after Burnley were relegated from the Premier League last weekend following a 2-1 defeat at the hands of Newcastle United.