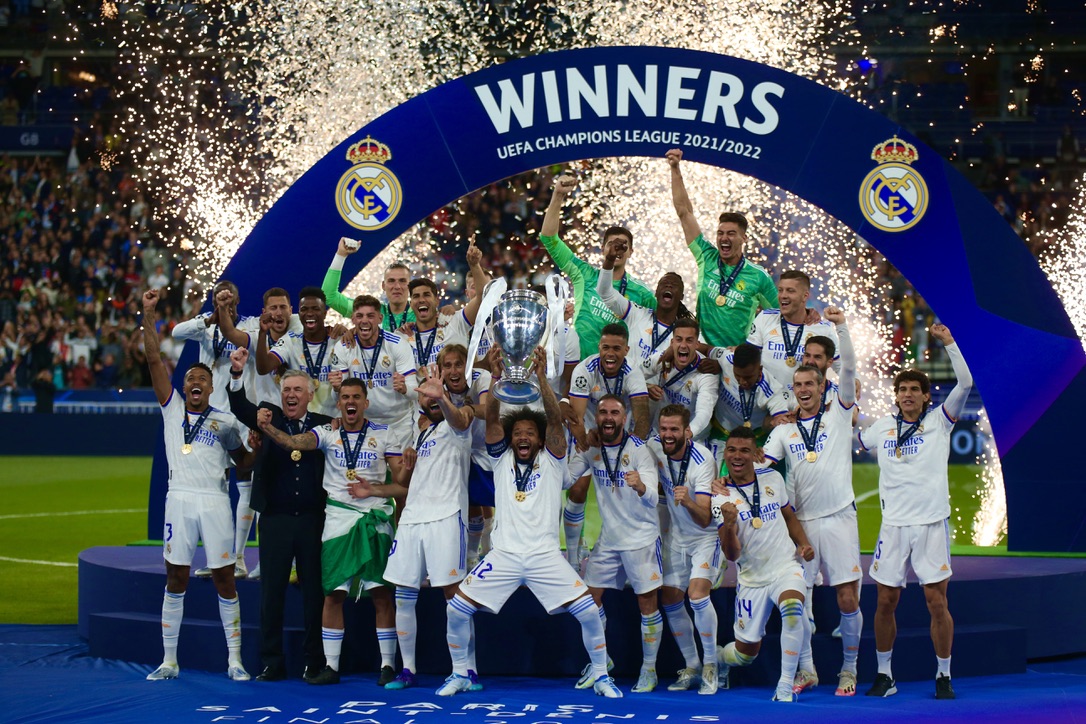 May 28 – Real Madrid won a record 14th European Cup with the narrowest of margins through a second-half Vinicius Junior strike against Liverpool in a Champions League final that failed to deliver on the promise of a great spectacle by the competition’s two finest teams. The final’s kickoff was delayed because of major crowd incidents and security breaches.

The match kicked off at 9.36 pm local time, almost forty minutes after the original kickoff time because of major crowd congestion and security breaches outside the Stade de France.

Much of what Liverpool had planned for the match went to plan, except for the final scoreline. Belgian goalkeeper Thibaut Courtois was the anchor of the Madrid rearguard with a man-of-the-match performance as the Spanish delivered a defensive masterclass.

They never delivered any of the drama that so marked their run-up to the final, but Vinicius Junior capped off an outstanding season with the championship’s winning goal. Who needs Kylian Mbappe?

After a predictable slow start to the final, Liverpool found their rhythm and overpowered Madrid with their barnstorming, attacking football, but Courtois, the standout goalkeeper throughout this season’s Champions League, got down smartly twice to prevent Mohamed Salah and Sadio Mane, who had wriggled free in between three Madrid players, from scoring in the first quarter of the match. He pushed Mane’s attempt on to his right-hand post.

Liverpool knew they needed to score before Karim Benzema did. The Frenchman had the ball in the net just before the break, but after a prolonged VAR check, Clement Turpin and his officials chalked the goal off. Madrid’s lead would have hardly been deserved.

Real had not managed to get a foothold in the game in the first half, with Thiago, doubtful with injury before the kickoff, pulling the strings in midfield. Liverpool pressed with a high line. At the other end, Vinicius lurked to exploit the space in behind the red rearguard. Benzema’s disallowed goal aside, the Spanish did not have a meaningful attempt at goal before the half-time whistle, reflecting the often wayward manner Madrid navigated much of the competition.

The tempo remained low after the restart, but as Liverpool began to press forward again, it was Vinicius who got the breakthrough on the counter from a long, defence-splitting Valverde cross with a simple tap-in in the 59th minute. Trent- Alexander Arnold was nowhere to be seen and so, out of nothing, Madrid were in the lead.

They were as lethal as they were defensively secure. Courtois produced two more expert saves from Salah, who was growing into the match. The Egyptian curled the ball to the far post and then got a shot in after a looped header from Diogo Jota. Chasing the game, Liverpool coach Jurgen Klopp introduced Roberto Firmino and Naby Keita.

In a grandstand finish, Courtois proved to be a match-winner with a sublime save from Salah again. Madrid lurked on the counter, but as Liverpool threw everyone forward it was clear that there was no passing Courtois.

It was a game too far for Liverpool and too many of the Reds’ players played below their best level. The FA Cup and League Cup double will feel like an inadequate reward for the fine season Klopp’s team enjoyed.

Madrid are back where they belong – at the top of Europe with Carlo Ancelotti winning the Champions League for the fifth time. It was fitting that captain Marcelo, who didn’t feature in the final, lifted the trophy, celebrating his 25th title in the Real shirt, a measure of the club’s winning culture.