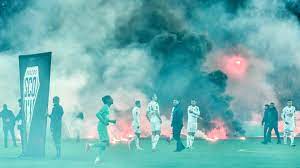 May 30 – After an 18-year stay in the top flight, Saint-Etienne, one of France’s most iconic clubs, were relegated from Ligue 1 on Sunday, prompting a pitch invasion by angry fans.

The 10-time French champions went down after losing a penalty shoot-out in their promotion-relegation play-off against Auxerre who return to Ligue 1 after 10 years.

French police used tear gas to try and disperse the crowd as fans hurled flares towards the official stand.

Players of both teams took refuge in the changing rooms but television footage from the tunnel showed players, stewards and staff coughing from the tear gas.

Saint-Etienne have already been sanctioned several times this season for the behaviour of its supporters and the game was played with one stand closed following incidents during the match against Monaco at the end of April.

“We will in a while announce important news concerning the future of the club and our own,” said Saint-Étienne shareholders Bernard Caiazzo and Roland Romeyer in a statement published just after the game which plunged Les Verts into the second tier for the first time since 2005.