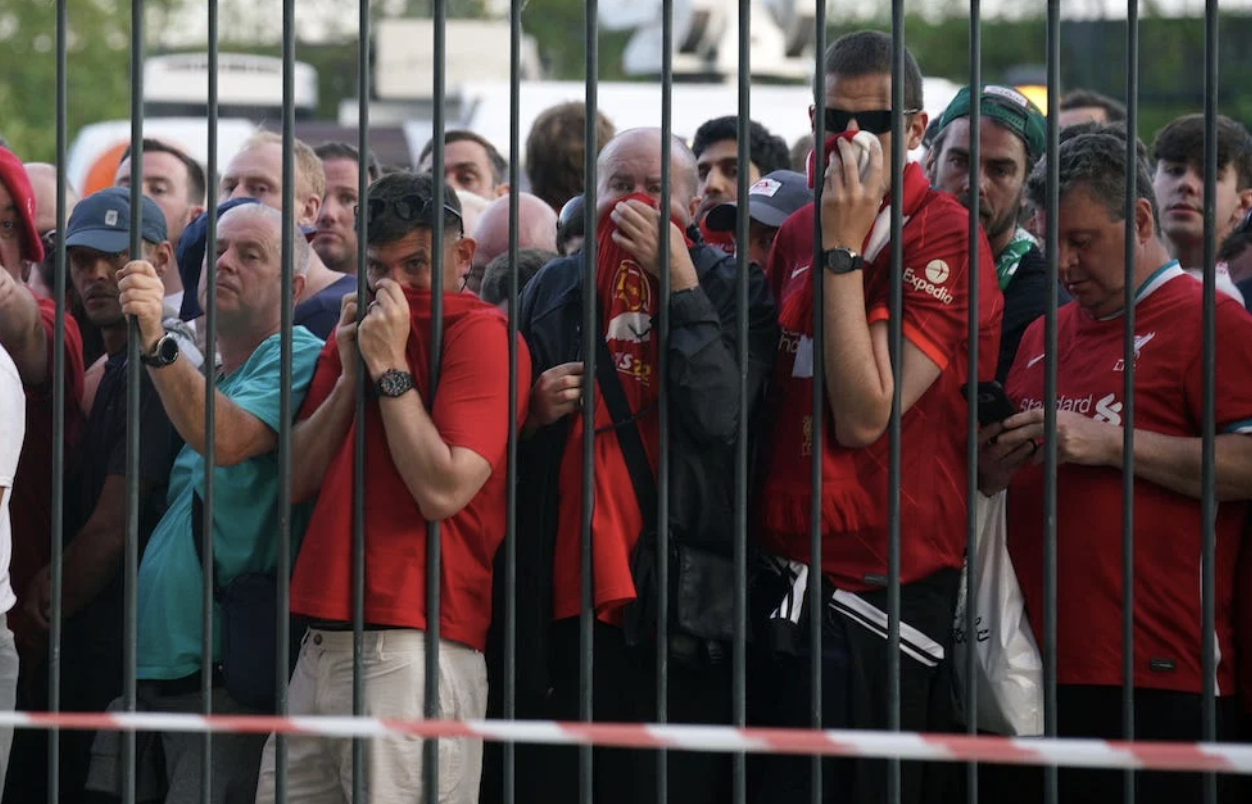 May 30 – Were Liverpool  fans deliberately targeted because of past incidents involving English supporters?

That is one of key questions being raised as French authorities prepared for an emergency meeting today with Paris police, stadium officials and UEFA to discuss the appalling scenes of chaos that marred Saturday’s Champions League final.

Both Liverpool and the UK government have called for an immediate investigation into the entire debacle which, according to eye-witness reports, could easily have descended into tragedy.

UEFA delayed kick-off by more than 30 minutes at the Stade de France, citing “security reasons” and Liverpool fans trying to enter with fake tickets. But that appeared to be a huge own goal both in terms of explaining the inadequate organisation that led to unnecessary crowd congestion and dangerous bottlenecks and in terms of the excessive behaviour of French police who used teargas and pepper spray against Liverpool fans.

French sports minister Amelie Oudea-Castera insisted her authorities were not to blame. “The attempts at intrusion and fraud by thousands of English supporters complicated the work of the stadium staff and police,” she said.

But that was in direct contrast to the explanation given by Liveprool police representatives who attended the final against Real Madrid to provide local management with additional expertise.

Merseyside police said its officers who were deployed in Paris “reported the vast majority of fans behaved in an exemplary manner, arriving at turnstiles early and queuing as directed”.

Merseyside Police’s matchday officers tweeted that it was “the worst European match” they had ever experienced.

“We are hugely disappointed at the stadium entry issues and breakdown of the security perimeter that Liverpool fans faced this evening at Stade de France,” Liverpool football club said in a statement.

“This is the greatest match in European football and supporters should not have to experience the scenes we have witnessed tonight. We have officially requested a formal investigation into the causes of these unacceptable issues.”

“The footage and accounts from Liverpool fans and the media on their entry to the Stade de France last night are deeply concerning,” she said. “Thousands of ticket holders travelled to Paris in good time to support their team in the biggest match of their season. I urge UEFA to launch a formal investigation into what went wrong and why.”

Many Liverpool fans claimed they had been at the stadium hours before kick-off but were stopped from getting into the ground.  By contrast, Real Madrid suffered no such issues, leading to suggestions that Liverpool followers were singled out.

UK sports minister Nigel Huddleston tweeted: “We are very concerned about the upsetting scenes around the Stade de France and shall be working with the appropriate authorities to find out what happened and why.”

Liverpool defender Andy Robertson described organisation of the match as a “shambles” and said that one of his friends who he had arranged a ticket through the club, had been denied entry being told the ticket was fake.

It was a common theme with hundred of fans who had bought tickets legitimately being told their tickets were fake. The stories of the violence by the authorities who indiscriminately pepper-sprayed men, women, children and even disabled supporters make harrowing reading on the forums and social media. As do the stories of fans crushed against the gates and struggling to breathe.

The mayor of Liverpool Joanne Anderson criticised the “appalling management and brutal treatment of fans” and said she would “requesting answers from UEFA and for President Emmanuel Macron to investigate”.

Her comments were echoed by local Member of Parliament Ian Byrne who said he had never witnessed such scenes since the 1989 Hillsborough disaster in which 96 Liverpool fans died.

“I can honestly say that the situation outside the ground was one of the most horrendous experiences of my life – and as a Hillsborough survivor, I do not make this comment lightly,” Byrne said.

Ironically Paris was only chosen in the first place after Uefa stripped St. Petersburg of hosting rights following Russia’s invasion of Ukraine.

But as French authorities launch a full review of why there was such  ineffective management, UEFA will equally be under intense scrutiny to gather as much detail as possible about safety and security in what was, after all,  a multi-stakeholder event – the biggest in fact in European club football.