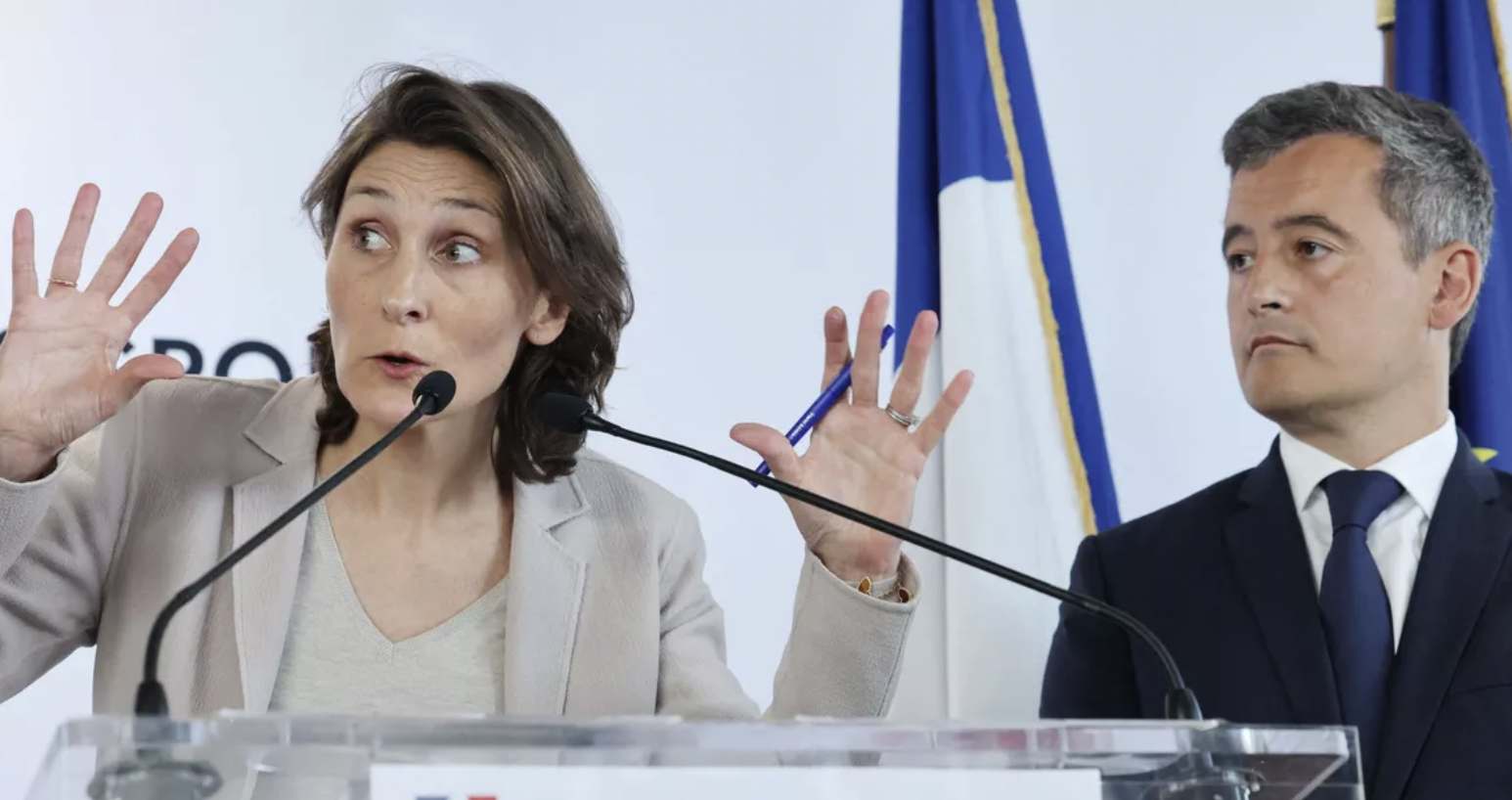 May 31 – Under pressure for the dangerous disorder at the Champions League final between Liverpool and Real Madrid in Paris, French authorities shifted the blame for the chaos to Liverpool fans with fake tickets, which were in circulation because of a “massive, industrial and organised fraud” according to French interior minister Gérald Darmanin.

At a news conference on Monday, Darmanin (pictured right) and French sports minister Amélie Ouéda-Castéra (pictured Left)asserted that 30,000 to 40,000 fake tickets were the root cause for the scenes of utter chaos and violence that could have triggered a major tragedy at the Stade de France. The final was delayed for 35 minutes with confusion reigning and police indiscriminately tear-gassing fans in and around the concourse of the Stade de France.

However, Darmanin didn’t provide any evidence for his claim, a figure he said was supported by UEFA. The European governing body didn’t respond to Insideworldfootball for a detailed breakdown of the figure. “Obviously there is nothing to be proud of with what we saw Saturday evening,” said Darmanin.

With hundreds of millions of viewers and worldwide press coverage, the complete breakdown in organisation has resulted in serious questions for French authorities and UEFA. The scenes both before and after the match cast serious doubt over the French capital’s readiness to host the 2024 Olympic Games when hundreds of thousands of sports fans will visit Paris.

Darmanin praised French police for preventing people from being injured or crushed to death and in one clean swoop shifted the blame onto the Liverpool fans. “Clearly there is only in football – and in particular, within football, with certain British clubs – that this kind of situation occurs,” said Darmanin.

“I’d like to thank the forces of law and order. They were very calm and able to avoid drama.” On Saturday, French riot police however were extremely aggressive and did nothing to help the situation.

Darmanin’s words were not without irony either as French authorities have struggled to contain rising violence in the domestic game with supporters invading the field at Saint-Etienne vs Auxerre on Sunday after a season full of crowd trouble.

French Sports minister Ouéda-Castéra, the wife of powerful banker Frédéric Oudéa, echoed UEFA’s initial explanation for the chaos by accusing supporters of arriving late at the stadium, an accusation that accounts of fan experience and media reports have completely debunked.

The statements by the two French ministers were reminiscent of the remarks David Duckenfield made after the Hillsborough drama when the police chief blamed fans without tickets. There were no apologies from the authorities for what was a massive organisational, safety and security failure at an industrial level, leading to the most dangerous Champions League final ever.

There was no evidence on the ground that up to 40,000 Liverpool fans turned up without tickets or with fake tickets. Reflecting the firestorm of criticism in various quarters, Jamie Carragher tweeted: “Gerald Darmanin is the fraud. The lies & spin from people in authority is a disgrace.”

Liverpool West Derby MP and fan Ian Byrne said: “It was awful, policing, stewarding, an extremely hostile atmosphere from the start, to treat football fans like animals is unforgivable”. He wrote to Foreign Secretary Liz Truss “to urge the strongest possible response.”

His views were shared by Liverpool. In a letter to Oudea-Costera, the club has demanded an apology to Liverpool supporters. Liverpool CEO Billy Hogan said the French sports minister’s comments were “completely inappropriate.”