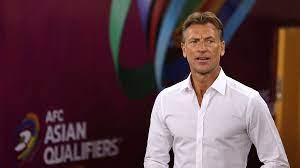 June 1 – In a region that historically changes their head football coaches of national teams almost as often as they change their shirts, the Saudi Arabian Football Federation (SAFF) have given French coach Hervé Renard a five-year extension to his contract, taking him through to 2027.

Renard took charge of the Saudi Arabian team in 2019 and masterminded the Green Falcons to their best ever World Cup qualification campaign, topping their group ahead of Japan and Australia with just one loss in 10 games.

Saudi Arabia had seven national team coaches from 2014 to 2019 when Renard was appointed.

Qatar 2022 will be the sixth World Cup the Saudis have qualified for and coincides with the country moving up the FIFA ranking from 70 in 2019, to 49 this month.

The extension of Renard’s contract will take him through to the AFC Asian Cup 2027, a competition the Saudis are bidding to host.

Yasser Almisehal, President of SAFF said, “Our objective for the national team is to provide continuity for the positive results we witnessed in the past three years. In Hervé Renard we believe we have the right man at the helm to lead the national team over the next five years.

“We are in the process of building a very ambitious project for Saudi football as a whole and we look to the national team to deliver the results that will reflect this progress,” he added.