June 12 – Japan, finding form at the right time, stormed into the semi-finals of the AFC U23 Asian Cup with a 3-0 won over current champions South Korea.

They will now face hosts Uzbekistan on Wednesday. The Uzbeks overcame Iraq 3-2 in a penalty shoot-out.

in their AFC U23 Asian Cup™ Uzbekistan 2022 quarter-final on Sunday.

Japan took the lead against Korea in the 21st minute when a fizzing Yuito Suzuki free-kick deflected off the top of Park Jeong-in’s head, hit the underside of the crossbar and settled in the back of the net.

Although Korea started the second half in control of the game, it was Japan who scored first. Mao Hosoya tapped in to put the Japanese two up in the 65th minute.

Japan put the game beyond doubt in the 80th minute. With Korea pressing, a Japanese counter-attack saw Takashi Uchino’s lobbed pass find Suzuki to hammer home his second of the game.

After 13 minutes of their semi-final against Iraqi it looked like hosts Uzbekistan were going to exit the competition in front of a packed home crowd at the Pakhtakor Stadium.

Reduced to 10 men after goalkeeper Abduvohid Nematov’s sending off, Uzbekistan fought back from 1-0 down to lead 2-1, only for penalties to be needed to decide the last eight tie after Iraq equalised to take the match into extra-time.

Head coach Timur Kapadze said: “If our boys fought like this under these circumstances, imagine how much better we can do if we actually have all 11 players on the field.

“In fact, we got a glimpse of that quality in our team today. The way our substitute goalkeeper, Vladimir Nazarov dealt with the curveball he was thrown at proves that we have enough players in the squad to make up for anybody’s absence.”

Uzbekistan (pictured) will be appearing in their third consecutive semi-finals after having won the title in 2018. 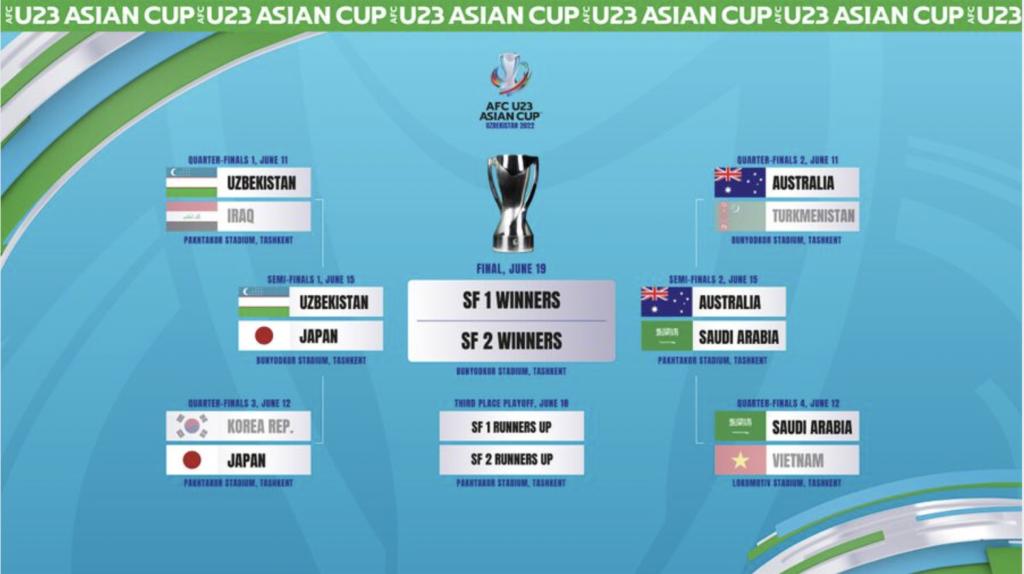 Saudi Arabia progressed to the semi—finals with a 2-0 win over Vietnam on Sunday.

Moteb Al Harbi put Saudi Arabia ahead in the first half with Firas Al Brikan sealing the win to set up a semi-final clash with Australia.

Both sides came into the tie aiming to win their maiden AFC U23 Asian Cup title with Vietnam having finished runners-up in 2018, while Saudi Arabia came second in 2013 and 2020.

The Saudis have yet to concede a goal in the finals.

They now meet Australia who overcame a resilient Turkmenistan, in the knockout rounds for the first time.

After a goalless first half at the Bunyodkor Stadium, Australia sealed victory through an own goal by Oraz Orazov in the 74th minute.