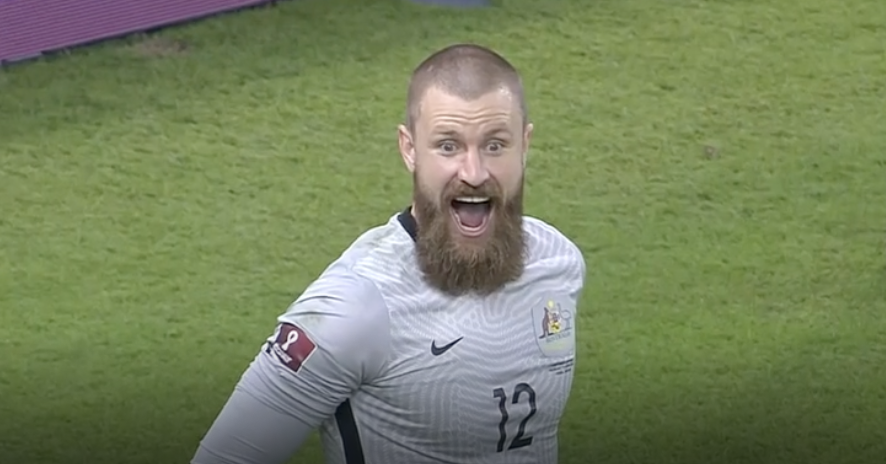 June 13 – Australia will return to the World Cup for a fifth consecutive time after eliminating Peru from the penalty spot 5-4, with substitute goalkeeper Andrew Redmayne proving the hero.

With the penalty shootout looming, Australia coach Graham Arnold made a bold move, substituting his trusted goalkeeper Matt Ryan for Sydney FC shot-stopper Redmayne, a man with just two caps under his belt.  It was his Louis Van Gaal moment. Everything was on the line.

On his line, Redmayne (pictured) behaved somewhat clownishly, jumping left and right, almost dancing, hardly befitting an elite goalkeeper. It seemed a tactic to distract the Peruvians penalty takers rather than anything else, but it worked. He saved a decisive penalty from substitute Alex Valera to steer Australia to its fifth consecutive World Cup. “I am not a hero, I just played my role,” said Redmayne.

This was the match and playoff to end them all, at least for the Socceroos of Australia and Los Incas of Peru. Who would punch the ticket for World Cup? Who would have to watch from home? This year the quadrennial high mass of the global game will be staged by Qatar, a host nation engulfed by accusations of human rights abuses.

At Doha’s Ahmed bin Ali Stadium the Peruvian fans rekindled the Latin atmosphere that so dominated the last World Cup in Russia.  They thrived in outside temperatures of 32 degrees Celsius.  On the pitch, it was a cool 19 degrees Celsius because of air conditioning, but the players were overcome by the importance of the match. They all wanted to return to Qatar at the end of the year.

It was a cagey first half: Australia pressed high in the opening minutes before Peru tried to take control of the match, not without caution. The South Americans moved the ball around smoothly as if they were waiting for their moment. No one wanted to make a mistake. But Australia seemed more at home in the conditions, having staged a training camp in Doha before overcoming the United Arab Emirates in the Asian playoff.

Perhaps Peru were punching above their weight in search of a second consecutive World Cup appearance.  A glance at their roster shows that the Peruvians hardly have any stars. Argentinean coach Ricardo Gareca built a solid unit, one that thrives on organisation and trust. But, on the touchline, Gareca was seen barking instructions, unhappy with the way his team were playing.

Peru didn’t improve much after the break. Playing more on the front foot, Gareca’s eleven remained disjointed. The Australians chased the game, but their compact defensive lines held firm. In a rare attack in the last ten minutes,  Aziz Behich jinked away from defenders but curled his attempt beyond the far post. Then Ajdin Hrustic didn’t connect well with a cross from substitute Awer Mabil.

It took Peru 98 minutes to have their first shot on target, courtesy of substitute Edison Flores. By then the match was a ‘stare-off’, even if Flores’ downward header kissed the woodwork.

Then Arnold made his move, bringing on Redmayne. “Andrew Redmayne is a very good penalty saver, and to try to get him on the mental aspect while we were making that change, to add that bit of uncertainty in their brains, that was, yeah, that is the reason,” explained Arnold.

It proved inspired and vindicated Arnold.  Australia will be back in Qatar – to play world champion France, high-flyer Denmark and Tunisia in Group D.  For the first time, six nations from the Asian confederation will feature at the World Cup, with Australia joining the quintet of hosts Qatar, Iran, Japan, Saudi Arabia and South Korea.