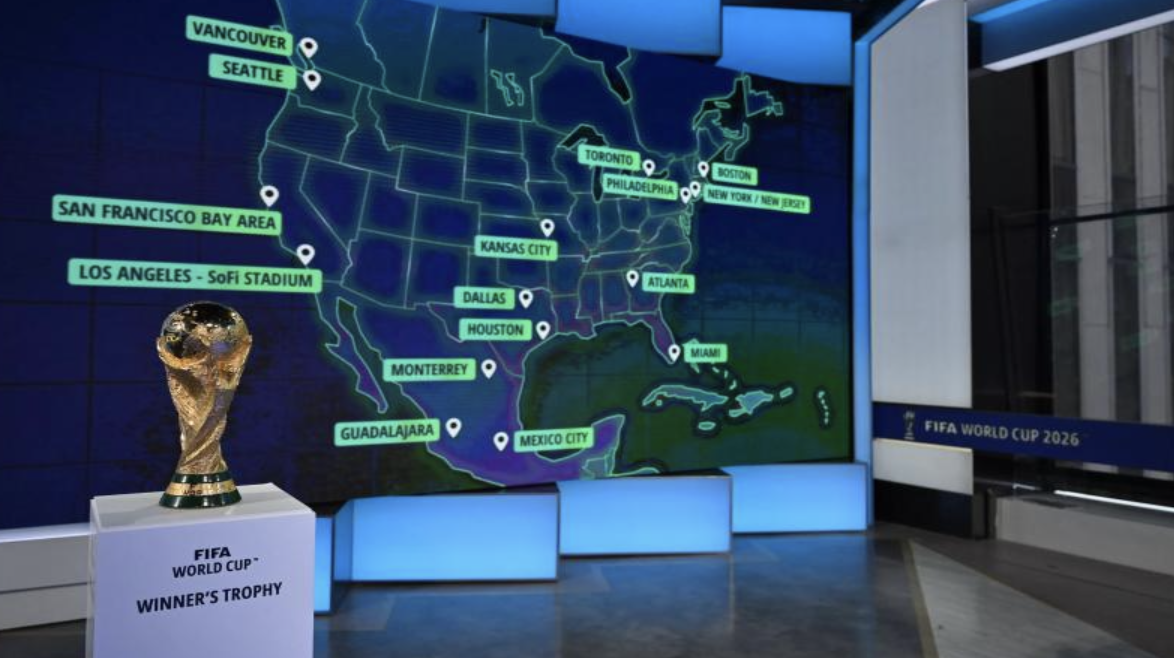 June 17 – The 2026 World Cup hosted by the United States, Canada and Mexico is beginning to take shape after FIFA announced the 16 host cities for the tournament on Thursday.  The American capital Washington, D.C./Baltimore and Edmonton didn’t make the cut, reducing Canada very much to a junior partner with just two host cities.

With Qatar on the horizon, FIFA is already shifting focus to North America for what promises to be the biggest World Cup ever, with 48 teams, an increase from the current 32, playing matches in 16 cities across the region.

Fox Sports broadcast the host announcement live with Concacaf president Victor Montagliani revealing the winning bids in the west and FIFA president Gianni Infantino, ubiquitous as ever, disclosing the successful host cities in the East, including the Metlife Stadium in New Jersey/New York.

“It was the most competitive process ever for the FIFA World Cup,” said  Infantino. “We will be working in clusters, making sure that the teams and the fans don’t have to travel too much in different areas: West, Central and East.”

It was striking that Washington, the United States’ capital, missed out on hosting matches.  At the USA 94 World Cup, the RFK stadium staged four group matches, including Saudi Arabia’s famous win over Belgium, as well as the round of sixteen encounter between Spain and Switzerland.

“This was a very difficult choice,” said FIFA’s chief tournaments and events officer Colin Smith.   “You can’t imagine a World Cup coming to the U.S. and the capital city not taking a major role as well.”

Infantino softened the blow by suggesting that a fan fest will be held on the National Mall in Washington DC. Montagliani offered similar hopes for Edmonton, after the city was snubbed.  Toronto and Vancouver were the only two Canadian cities to be selected. Monterrey, Mexico City and Guadalajara will serve as host cities in Mexico, with the Mexicans lobbying to stage the opening match at the Azteca Stadium. The country will host the World Cup for a third time after staging the event in both 1970 and 1986.

With The Rose Bowl in Pasadena – which hosted the final in 1994 not making the final cut, it’s up in the air which city will stage the World Cup final. Los Angeles SoFi Stadium, which recently hosted the Super Bowl, will be a strong contender, but New York and New Jersey are keen on bringing the showpiece match to the East Coast.

“We’ve got all the things that FIFA would want in a finals region and stadium, and that’s why we’re going at this hard,” said New Jersey Governor Murphy, who heads a group of regional officials that also includes Mayor Eric Adams of New York City.

“We will take our time with the decision,” said Infantino. “New York is definitely a candidate, and so are the 15 other cities as well.”

The United States will organise the bulk of the tournament’s 80 games. Of the 16 cities chosen, eleven were American. The original bid said that there would be 10 host cities in the US, and three each in Canada and Mexico. Until the final three months before the announcement there were only two Canadian cities bidding. Vancouver were a last minute addition. Edmonton will now be feeling very unloved and short changed.