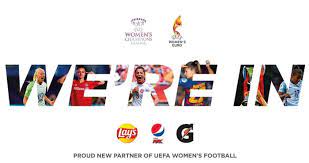 July 7 – PepsiCo has joined with Women in Football, to sponsor 45 aspiring female coaches on the English FA’s ‘Introduction to Coaching’ course, with the aim of opening the door for talented women to build careers in football.

The partnership will give the chosen female coaches access to group training sessions and networking opportunities to help build a lasting community and strong bonds amongst this cohort of talented women.

Fiona Tomlin, chief marketing officer at PepsiCo UK & Ireland, said: “As a global company, we want to use our platform to help women thrive in the game, from the players leading the line-up at UEFA Women’s EURO 2022, to talented coaches looking to break into football.

“We believe that the women’s game should be just as valued and celebrated as the men’s game, and this partnership with Women in Football is one way we’re hoping to make a meaningful and long-term difference to champion female participation at all levels,” she continued.

Research shows that while there are more female coaches than ever before, 72% of head coaches in women’s football are male, and not one Premier League side currently has a female coach as part of its men’s first team staff. Women in Football research found that 66% of women in the industry have experienced gender discrimination on at least one occasion.

Women in Football CEO, Yvonne Harrison, added: “Almost three quarters of our members told us they want more support for the development of women in leadership roles, which underlines why partnerships like this are so important.

“Creating opportunities for women in coaching can have a positive ripple effect on female representation in football as a whole, with more role models for young women to look up to. PepsiCo’s support through its global brands Pepsi MAX® and Doritos can help us make a real difference as we work to level the playing field.”

PepsiCo has made a long-term commitment to women’s football as a sponsor of UEFA Women’s Football until 2025, and specifically sponsoring the Women’s Euros 2022.

Nominations for the FA course are open to all women, 18 and above. Entrants can apply in writing, telling Women in Football in 50 words or less why they should be selected to receive one of the 45 coaching bursaries.