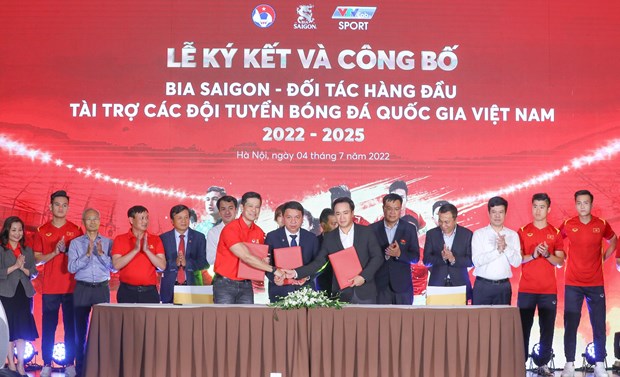 The deal begins this month and will run through to July 2025. It is an extension of an agreement that was initially signed in June 2021 for a year.
The formal deal was signed between SABECO, the Vietnam Football Federation (VFF) and the VTVcab Sport Development Joint Stock Company (VTVCab Sport), an was announced by SABECO in Hanoi.
Speaking at the launch of the sponsorship, Deputy Minister of Culture, Sports and Tourism Hoang Dao Cuong stressed the importance of sponsorship for Vietnamese sports and said he hoped SABECO would encourage more business sponsor to get involved.

Vietnamese football has been progressing rapidly internationally with the country making the final rounds of AFC World Cup qualifying for the first time. The elevation to competing with Asia’s elite nations sparked national fervour and pride in the team, delivering record broadcast audiences.

Vietnam’s women’s team beat Chinese Taipei 2-1 in a playoff tie to qualify for their first ever Women’s World Cup finals Australia/New Zealand 2023. It is the first time a Vietnamese senior team has qualified for a WorldCup finals.

SABECO, was a sponsor of the Vietnamese team at the 31st Southeast Asian Games in May.
The beer firm previously sponsored the Vietnamese sports delegation at the 31st Southeast Asian Games (SEA Games 31) in May. It was the sole sponsor for the doping control programme at SEA Games and is the naming rights sponsor of the country’s 7-a-side national championship – SaiGon Beer Cup.

SABECO said it recognised the competitive improvements the Vietnamese national teams had been making and wanted to be part of the development of the teams as they challenged for international honours.