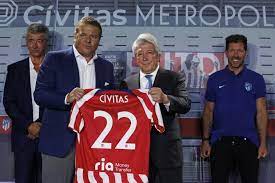 July 20 – Atletico Madrid have sold the naming rights to its Metropolitano stadium to Civitas in a 10-year deal.

Civitas take over from Wanda who have become synonymous with the Metropolitano after five years of sponsorship. That deal was reportedly worth €10 million a year.

No value was given for the Civitas deal but it will likely be considerably more than Wanda were paying.

Civitas’s business is in real estate and construction and the company has been given the contract to build Atletico Madrid’s new ‘Sports City’ complex on land around the stadium earmarked as the site for the city of Madrid’s Olympic Park.

The site will include a smaller stadium for Atlético’s women’s team and B team, and will also host games in the Uefa Youth League. The ground will accommodate 6,000 fans in what the club said will be a state-of-the art facility.

Plans also allow for the building of a high-performance training facility.

Atlético Madrid president, Enrique Cerezo, said: “Today we present an innovative initiative, with a city objective: that Madrid become a reference in the fields of sport and sustainability.”