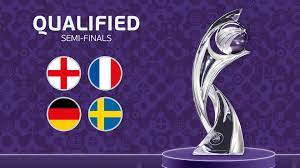 After their somewhat fortunate quarter final win over Spain, England taken on Sweden, the world’s second-ranked team, on Tuesday for a place in the final of Euro 2022.

The Lionesses, yet to claim a major title, compete in a fourth successive semi-final when they face the Olympic finalists who on paper will present just as tough a challenge as the Spaniards.

England forward Fran Kirby says her team will “lean on” the experience of head coach Sarina Wiegman as they bid to avoid a fourth successive semi-final defeat in major competitions, having fallen at this stage of the 2017 European Championship as well as the World Cup in 2015 and 2019.

“She’s been there and done it; she’s got to finals, she’s won major finals,” said Kirby referring to Wiegman steering the Netherlands to the title last time out.

“She’s made every person feel valued in this team – whether you’re a starter, whether you’re coming in as a sub, whether you don’t get any minutes. I think everyone knows what their role is in the team and what they’re there to do. They’ve taken that in their stride.”

England will carry an 18-game unbeaten run into the game against Peter Gerhardsson’s Swedes who carved out a remarkable 32 chances against Belgium on Friday but had to wait until the 92nd minute for their 1-0 win.

Now they take on the hosts as they try to win their first major title since the 1984 Euros. The Swedes have come agonisingly close since then, winning two Olympic silver medals and finishing as World Cup runners-up in 2003.

Sweden have emerged victorious from the last two meetings with the Lionesses but will have two less days to prepare and will hope that the players who have been affected by COVID can return.

“There’s an enormous strength in our individuals, which makes us a strong group,” said Gerhardsson.

“It will be an enormous, fantastic experience. I can assure you we are going to have a plan, and we need an extremely good plan.”

Highly fancied France, meanwhile, ended their run of quarter final eliminations in major tournaments by knocking out defending champions the Netherlands 1-0 after extra time to set up a mouth-watering clash with Germany on Wednesday.

The Germans, who have won the tournament a record eight times, were considered to be less of a threat this time but have steamrollered past their opponents, are yet  to concede a goal and have an 11-0 aggregate score over three matches.