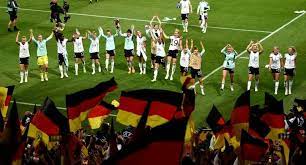 July 28 – England against Germany. One of the great rivalries in European football will take centre stage again on Sunday after the Germans beat France 2-1 in the semi-finals of the women’s Euros on Wednesday to set up a winner-takes-all showdown with the host nation.

Prolific striker Alexandra Popp scored both goals as the Germans, eight times European champions who have never lost a final in the competition, restored their reputation as a major powerhouse in the women’s game.

This was not supposed to be a vintage tournament for Germany after something of a lull following years of dominance. But they once again showed all their trademark organisation and teamwork to end the run of a young and skilful French team.

“We played an amazing game and threw everything in,” said Popp, who has now scored six goals in five games at the tournament after a terrible time with injuries in recent months.

The 31-year-old German captain fired her team ahead in the 40th minute, sneaking in to meet a fine cross from Svenja Huth. The lead lasted less than four minutes, however, as France levelled when Kadidiatou Diani’s drive hit the post and flew in off the back of Germany keeper Merle Frohms.

France had the better chances after the interval but they couldn’t find a way through. Popp made them pay by powering home a superb header and is now vying with England’s Beth Mead for the Golden Boot. Although the French continued to push, they lacked precision in the final third.

“We are incredibly happy; nobody expected us (to do it). We’re in the final at Wembley against England — it doesn’t get any better than that,” said Popp.

“We earned our self-confidence in all the games. The team is just great; they have my back and are happy with me after my whole story of suffering.”

Sunday’s sold-out final will be a “great football feast”, said Germany coach Martina Voss-Tecklenburg. “It’s a classic game, it will be an incredible final. We will be playing at Wembley in front of 90,000 people and most of them against us …but we understand that and we’re accepting the challenge.”

England, who have never won the tournament, reached the final thanks to a 4-0 victory against a Swedish side ranked second in the world on Tuesday. The Lionesses have not been beaten since coach Dutch coach Sarina Wiegman took over in September.

“England have been incredible in this tournament every single game for dynamism, lots of goals and they are so incredibly confident,” said Voss-Tecklenburg. “They know what they have to do but in the first 30 minutes against Sweden they showed you can hurt them and that will be our task. It will be a great football feast.”

“I know Sarina is an incredible coach, it’s not about being the better coach. We know each other’s strengths. It’s small details, forcing certain things, making fewer mistakes. We know what we have to expect and we will be ready but we have high respect for each other. She has already proved with the Netherlands that she can win a title and I hope it stays at one title.”