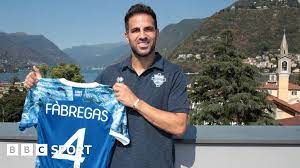 The Spaniard became a part-owner of the Serie B club after penning a two-year playing deal, the club’s chief executive Dennis Wise confirmed.

“He owns part of the club, he’s a shareholder,” Wise told UK media. ”That’s what Cesc wants to get involved in. He’ll be here a lot longer than expected really. It was important, he felt that way, to be part of it going forward long-term. He could see what we’re trying to achieve at this football club.

“There’s a lot more to be done at the football club regarding where we want to end up, in Serie A. He sees it as a good opportunity and I’m pleased he’s on board.”

Como went bankrupt before British-based company SENT Entertainment acquired the club in 2017. They enjoy the backing of Indonesia tobacco industry giant Djarum. In 2019, Wise was brought in as chief executive.

Fabregas, who also played at Barcelona and Chelsea, was released by Monaco at the end of last season. No figure was given for the size or value of his stake in Como.

Fabregas said: “I invest in the club properly and this is the biggest way for me to show how ambitious we are as a club. What I would love to do in the future as a player now and I want to be a coach in the future, something that is inside of me, it’s something I’d love to experience.

“But also as a club to just keep growing for the years to come and see where we can get. Definitely, the club is in good hands. That’s what brought me here really, the ambition to keep doing well and to see something always across the line.”