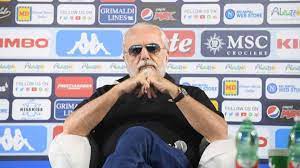 August 3 – The controversial and notoriously outspoken president of Italian top-flight club Napoli, Aurelio de Laurentiis, has hit out at the timing of the African Cup of Nations and says the club will stop signing any more African players unless they agree not to play in the tournament.

“Enough of African players, or they should give up playing in the African Cup of Nations. I won’t be buying them any more otherwise,” De Laurentiis (pictured) told a Wall Street Italia show.

Koulibaly and Zambo Anguissa missed Napoli’s 1-1 draw with Juventus in early January and the Coppa Italia defeat by Fiorentina, but the club then managed four league wins in their absence.

The timing of the Nations Cup has long adversely affected by European clubs who are forced to release players in the middle of the season. The next edition is be held in January and February 2024 in Ivory Coast, having been moved from its initial dates of June-July because of weather concerns.

Current FIFA rules stipulate that players must be released but de Laurentiis charged: “We pay the salaries to send them around to play elsewhere in the middle of the league championship.”

Koulibaly spent eight years at Napoli and responded to De Laurentiis’ comments by saying it is important to “respect everybody”.

“You cannot speak about African national teams like this,” the 31-year-old defender told the BBC. “You have to have respect, and as captain of Senegal it is not a good way to speak.

“If he thinks that the team can play without African players, it’s up to him. But I think not everybody has the same idea as him.”