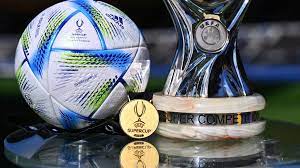 By Samindra Kunti in Helsinki

August 10 – For the first time since 1960 and the European Cup Final that the Spanish club won in a 7-3 spectacular at Hampden Park in Glasgow, Real Madrid and Eintracht Frankfurt meet again in a competitive match with the Super Cup at stake in the curtain-raiser for the European season.

After winning a 14th European Cup with a narrow 1-0 victory against Liverpool last May in a Champions League final that was marred by dramatic scenes of unprecedented and dangerous chaos outside the Stade de France, Real Madrid coach Carlos Ancelotti are confident that the club can improve on their stellar results from last season.

“We’ve signed two players [Antonio Rudiger and Aurelien Tchouameni] who have improved the physical and technical quality of the team,” said Ancelotti in a news conference in the Finnish capital.

“We’ve had another year of working together, improving the alchemy between the veterans and youngsters. That was one of the successes of the team last year, and that can improve, because we’re more used to being together.”

Reflecting on last season, Ancelotti said: “Was last season the most amazing of my career? Perhaps so, yes. I’d never coached a team to a league and Champions League double. It’s down to the spirit, attitude, quality, and enthusiasm of my players that we qualified to be here by winning the Champions League.”

With Karim Benzema as the new captain, Ancelotti will seek to field the same eleven that defeated Liverpool in as far as fitness allows it, but that won’t scare Eintracht Frankfurt whose coach Oliver Glasner said: “This is the reward for our incredible season, to face a Real Madrid side that have incredible quality and last season knocked out some of the best teams in Europe. What we proved in the Europa League last season is that there’s always a chance and it’s the same tomorrow. We’re going to play with confidence because we know what we’re capable of.”

Frankfurt will be backed by around 10,000 fans at Helsinki’s Olympic Stadium. In the last campaign, the German fans marked their presence around Europe as their team defeated Barcelona, West Ham United and ultimately Rangers in the final to clinch the Europa League. On Wednesday, they will be hoping for another victorious outcome in another European adventure.