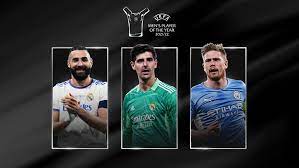 August 12 – Karim Benzema, Thibaut Courtois and Kevin De Bruyne have been nominated for the UEFA’s player of the year award. Carlo Ancelotti, Pep Guardiola and Jurgen Klopp were shortlisted in the coaches’ category.

An initial shortlist of 15 players was whittled down to three nominees by a jury of elite coaches and European journalists. Both Benzema and Courtois played crucial roles in Real Madrid’s dramatic Champions League conquests last season, which culminated with a narrow 1-0 victory in the final against Liverpool.

In the coaches category, three heavyweights of the game will vie for the award. Carlos Ancelotti led Spain’s Real Madrid to the double, winning La League and the Champions League whereas Pep Guardiola and his team cemented City’s dominance in the English topflight. Jurgen Klopp’s side lost the Champions League in Paris, but still won the domestic league cup and FA Cup double.

The award winners will be announced at the 2022/23 UEFA Champions League group stage draw ceremony on August 25 in Istanbul. UEFA added that ‘Voting for the UEFA Women’s Player and Coach of the Year awards is in progress.’ The nominees will be announced next week.