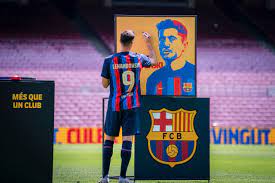 August 15 – After all the noise of Barcelona struggling to register their new signings with LaLiga, the club eventually opened their season with a 0-0 draw against and with four of their big money signings cleared to play.

New signings Robert Lewandowski, Raphinha, and Andreas Christensen were all in the starting line-up, as was Ousmane Dembele who was already a Barca player but was on the wrong side of the registration rules.

New signing Franck Kessié was on the bench, as was Sergi Roberto who was in a similar registration position to Dembele. The only new signing to miss out was Jules Koundé.

It was something of a flat ending to a week of player drama and the on-off sale of Barca assets to meet LaLiga’s financial rules. That was only achieved at the last minute on Friday with the sell off a third stake in its Barça Studios production division.

Having already raised €100 million from selling 24.5% stakes to Socios.com and thought they had secured another €100 million from US venture capitalists GDA Luma, Barca were left scrambling after the US deal fell through, leaving the club short of meeting LaLiga’s spending cap.

In the end they were saved by a €100 million sale of that 24.5% stake to Orpheus Media, a production entity run by Mediapro co-founder Jaume Roures.

“Barcelona announces the sale of 24.5 per cent of Barça Studios to Orpheus Media, an audiovisual production company with a long history of producing content, for €100m. The agreement complements the one signed on 29 July with Socios.com and will help to accelerate the growth of the club’s digital, NFT and Web.3 strategy,” said Barca in a statement.

“With this investment the strategic partners in Barça Studios show confidence in the value of the project and the future of digital content in the world of sport.”

The money will be used to pare down Barca’s €1.3 billion debt and the payments the club has to make on it. It was eventually enough to get big name signings playing but it didn’t buy them the three points they wanted to start their season.