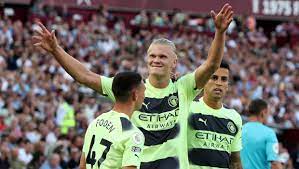 The partnership will focus on content, with Viaplay to release a documentary about Haaland. “We have had very good access to Team Haaland in the process of finding a new club – and have been able to follow their assessments regarding the world’s most talked about transfer on the inside. We are now looking forward to presenting that to the viewers”, said Jan Age Fjørtoft in the press release.

However, questions can be asked about mixing commercial and editorial interests in the deal.

“Erling and Viaplay complement each other perfectly. As our partnerships with Max Verstappen and now the Premier League’s latest superstar make clear, Viaplay not only shows sports’ biggest names in action every week, but brings fans closer to them than anyone else,” said Viaplay chief executive Anders Jensen.

Formerly called Nent, before acquisition by Viaplay, the broadcaster has a Premier League rights deal in the Nordic countries until the 2027-28 season.

The streaming operator recently also acquired Premier Sports in the UK, with Jensen commenting on the acquisition saying: “It’s important that we keep cool heads. We enter a competitive large market with lots of opportunities in a time with a bit more depressed financial circumstances for many households. It’s very important we balance our willingness to invest up against our ability to deliver value for money to households.”