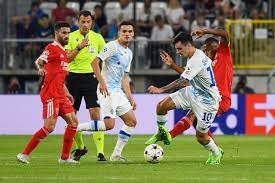 August 18 – Benfica defeated Dynamo Kyiv 2-0 to take a major step towards Champions League qualification and dash the dreams of the Ukrainian club.

Playing in Lodz, Poland, the Ukrainian players took to the field with their national flag draped over their shoulders, once more highlighting the war in Ukraine following the invasion by Russia. Since the war began the club has played charitable friendlies around the world, but on Wednesday a Champions League ticket was at stake against Benfica.

In the first half, the Portuguese giants were too strong for Kyiv, resulting in goals from Gilberto and Gonçalo Ramos. The hosts tried to cut the deficit after the break but failed to seize on their chances. Benfica will be the favourites to carry the tie in Tuesday’s return leg in Lisbon.

Elsewhere, Maccabi Haifa defeated Red Star Belgrade at home 3-2. It was the first defeat of the season for the Serbian side.

On Tuesday, the Nordic clubs gained the upper hand in their ties. Fc Copenhagen narrowly overcame Turkish champions Trabsonspor with goals from Viktor Claesson and Lukas Lerager, 2-1. In Norway, Bodo Glimmt also secured a one-goal advantage against Dinamo Zagreb. Rangers and PSV Eindhoven have all to play for after an intense 2-2 draw at Ibrox.

The return legs will be completed next week on Tuesday and Wednesday before the Champions League draw on August 25.

Europe’s premier club competition kicks off in the first week of September. Real Madrid are the defending champions after a Vinicius Junior goal was enough to see off Liverpool in the final of last season’s edition and lift the European Cup for the 14th time.