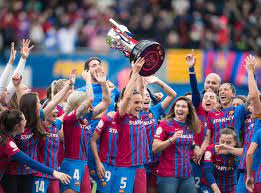 The agreement covers commercial and sponsorship assets for the Primera División and will include looking for a naming rights sponsor following the end of a six-year deal with energy company Iberdrola.

The agreement does not include the sale of broadcast rights.

LaLiga said its involvement will bring in revenue of at least €42 million for the LPFF, and reports are that German sports brand Puma has already agreed to become the Primera División’s official ball sponsor.

The LPFF said that the deal with LaLiga is “one of the most important commercial agreements in the history of women’s sports worldwide.”

The LPFF added that it “will make it possible to face the great and exciting challenges that arise at the level of development and growth of the competition, also allowing the clubs to be provided with resources to improve their management structures, and, with this, the improvement of the conditions of the soccer players.”