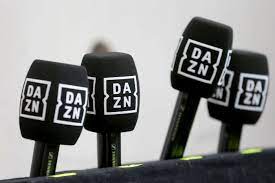 The streaming platform will broadcast all 240 matches each season from the Spanish women’s top-flight with seven out of eight fixtures per weekend exclusively live-streamed on DAZN in the deal that runs until the end of the 2026/27 season.

Mediapro is reportedly contributing an additional €1 million per season to the broadcast pot, presumably for rights to the game per week that DAZN is not streaming exclusively. Media reports in Spain also suggest that the league will soon unveil a title sponsor.

“We couldn’t be prouder to build on our commitment to increase the visibility of women’s football by becoming the new global broadcaster for LPFF,” said the chief executive of DAZN Group Shay Segev.

“We want to make the players, coaches and clubs household names and an inspiration for the next generation of footballers and fans around the world.”

DAZN have embarked on a programme of acquisition in the women’s game having secured the rights to the UEFA Women’s Champions League last year. Those matches are currently live-streamed on Youtube with free access for fans, though Dazn plans to move the broadcasts behind their platform paywall. The strategy has so far generated record audiences with more than 3.6 million viewers watching the final between Barcelona and Olympique Lyon.

Launched in 2016 and owned by British-American billionaire Leonard Blavatnik (Ukrainian-born and a dual US-UK citizen), DAZN has invested billions in sports rights with the aim of becoming “an indispensable part of sports fans lives” but even after the sale of the Perform subsidiary to Vista Equity Partners for a reported $1 billion in 2019, and the introduction of cost-saving measures to address the financial fallout of the global health crisis, the model of offering exclusive live sports on a market-to-market basis at low prices has been shaken.

At the end of 2019 the company’s published set of accounts show, carried a staggering loss of $2.3 billion. In 2020, DAZN racked up pre-tax losses of $1.3 billion. Blavatnik and Access Industries agreed on a recapitalisation of $4.3 billion to leave the DAZN group debt free.