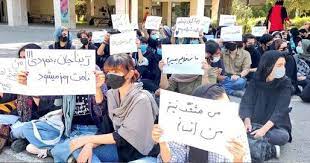 September 22 – Former Bayern Munich star Ali Karimi has been at the front of escalating protests against Iranian authorities prompted by the death in custody of a woman, Mahsa Amini, detained for breaking hijab laws.

“I am not looking for any political post or power. I am only looking for the peace, comfort and welfare of all Iranians – all across our great and vast land,” said Ali Karimi, posting dozens of pro-protests and anti-regime posts and shedding light on some of the brutality with which the authorities have reacted to the protests.

The former Bundesliga player has eleven million followers on Instagram.

It is understood that Karimi is under huge pressure from the Iranian authorities.

Both Karimi and Ali Daei have reportedly been banned from being mentioned on TV due to publicly supporting the #MashaAmini movement.

“Instead of comforting and apologising for your mistakes – you make the people hate you more. Shame on your dishonour and satanic actions,” protested another Iranian football legend Mehdi Mahdavikia

Protests in Iran erupted over the death in detention last week of Mahsa Amini, a 22-year-old from Iranian Kurdistan who was arrested in Tehran for “unsuitable attire”.

There were reports that police beat Amini’s head with a baton and banged her head against one of their vehicles, Acting UN High Commissioner for Human Rights Nada al-Nashif said.

At first, the protests were concentrated in Iran’s Kurdish-populated northwestern regions but they quickly spread to at least 50 cities across the country. The protests are the largest since a wave of demonstrations in 2019 over gasoline price rises.

Iran and Leverkusen star Sardar Azmoun, with 4,8 million Instagram followers, wrote on social media: ‘If they are Muslims, my Lord, turn me into a disbeliever. #Mahsa_Amini’.

That social media post has since been deleted alongside others by national team players. Iran is warming up for the World Cup with friendlies against both Uruguay and Senegal in Austria.