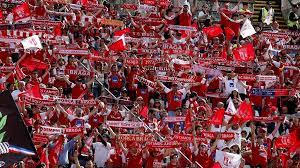 Braga are currently in third place in the Portuguese top flight. No value has been given for the 21.67% stake that QSI have bought in the club.

In 2011, QSI took control of Paris-Saint Germain and poured hundreds of millions into the club in a bid to win the Champions League. In 2012, through the Aspire Zone, KAS Eupen in Belgium became a part of the Qatari portfolio, largely to provide a gateway to Europe and playing experience to players of the Doha-based Aspire academy.

“SC Braga is an exemplary Portuguese institution, with a prestigious history, enormous ambition, and a reputation of excellence on and off the pitch. As investors and partners, we are impatient to see the club innovate, grow and develop itself even more, through its men’s and women’s teams as well as in commercial terms and its brand, within all of the communities and companies it supports,” said Nasser Al Khelaifi, chairman of QSI.

Al Khelaifi is also president and CEO of Paris Saint-Germain, chairman of beIN Media Group, and Turkish mobile and broadcast platform DIGITURK. He is also chairman of the European Club Association and sits on UEFA’s executive committee.

Braga have won the Portuguese cup on three occasions and often feature in the Europa League.