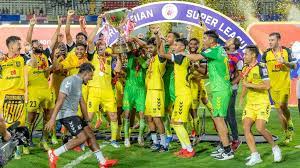 November 7 – From next season on, the winner of the I-League will be promoted to the Indian Super League (ISL), introducing promotion and relegation in the Indian game.

In a tweet, All India Football Federation (AIFF) president Kalyan Chaubey wrote: “According to roadmap between AIFF and AFC, starting with 2022-23 season, the winners of Hero I-League will stand a chance to be promoted to Hero ISL season 2023-24 basis fulfilling sporting merit and clearing Premier 1 Licensing criteria.”

In 2019, the ISL with a franchise-based model became India’s top flight, relegating the I-League to second-tier status, even though the I-League enjoys a more organic ecosystem.  The smaller revenues, a consequence of their lesser status, left the clubs in the I-League fighting for survival. They were, however, promised that a system of promotion and relegation would be introduced from the 2022-23 season and newly-elected AIFF president Chaubey has now confirmed that the roadmap will be respected.

Local media report that Football Sports Development Limited (FSDL), the body behind the ISL, is on board with the new changes. Franchises in the ISL pay an entry fee of about almost €2 million, but that fee won’t apply to the I-League club that gains promotion.

Last year Kerala Blasters and East Bengal failed to meet all ISL licensing criteria, but were ultimately allowed to compete on an exceptional basis.