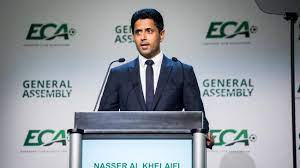 November 11 – European Club Association chair and PSG boss Nasser Al-Khelaifi, speaking at the UEFA Convention – Future of European Football, the day after European stakeholders met with Super League breakaway protagonists A22, gave a hard-hitting assessment of the group who he said “proved yesterday that they just don’t understand football and itsecosystem”.

“Sadly, as we saw yesterday at our meeting with A22 – maybe it will become A23 or A24 next, a new rebrand each year –some people are still trying to re-write history and to divide football with PR presentations and power-points. To be honest, Ifeel sad for them because they proved yesterday that they just don’t understand football and its ecosystem,” said Al-Khelaifi.

Highlighting that Real Madrid, Barcelona and Juventus continue to play in European tournaments despite maintaining the Champions League isn’t exciting enough, he said: “I don’t understand. Last week, for my club, the winner of the groupwas decided in the last minute – congratulations to Benfica, the well-deserved winners. And every team in Group D couldhave finished top or bottom of the group. But apparently that’s not exciting enough; and they have the solution.

“We hear that the Champions League isn’t competitive enough. But many big clubs did not qualify from the group stages. Thiscould have been my team – that’s football. No club has a divine right to win,” he continued.

And responding to remarks made by Real Madrid president Florentino Perez about Rafael Nadal and Roger Federer and their dominance of tennis for the betterment of the game, he said: “I have a small experience in tennis as a former player. Let me tell you – Rafael and Roger are two of the greatest athletes in the history of sport. This is not becausethey played together all the time. It is because they worked so hard. Every match was important, whatever ranking they playedagainst. They never asked for a closed league of the top players. They defended the tennis family. Please don’t use their great names to justify your failures.”

Implying that the A22 group were a broken record driven by greed and swimming against the tide of public and European football opinion, he said that European football needs to consider the interests of all stakeholders.

“At yesterday’s meeting the voice of the fan groups were heard loud and clear. They spoke from the heart. Self-interesthas no place in football. And I totally agree,” said Al-Khelaifi.

Speaking about the closer relations between UEFA and the ECA he said: “Of course we don’t agree on everything…But we have the same foundation, values and principles.”

Highlighting key areas where the co-operation is bringing tangible results he spoke of financial stability as Europeanfootball returns after COVID; new financial sustainability rules that encourage investment and new investors and will helpsecure football’s sustainability; and the growth in impact of the Europa League and Europa Conference League which have become established in the expanded European club competition eco-system.

He also referenced the agreed post-2024 competition formats which he said will give more opportunities to small andmedium sized clubs, as well as UEFA and ECA Joint Venture which has created new commercial opportunities for European football.

“We also don’t need to tear things down to reform. We can achieve great positive change from within the system – UEFA and the ECA have shown this already in the past year,” said Al-Khelaifi.