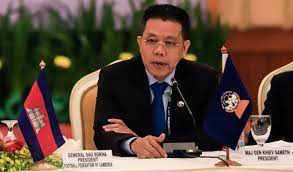 November 16 – Cambodia’s Major General Khiev Sameth (pictured) has been re-elected as president of the ASEAN Football Federation (AFF) at its 8th Congress in Siem Reap, Cambodia.

Elected unopposed, Sameth’s new four-year term will take him through to 2026.

Al Misehal praised the Football Federation of Cambodia (FFC) and its President General Sao Sokha for their hospitality and commended “the passion and drive of the ASEAN football family to develop football across the region”.