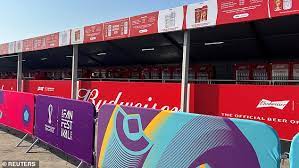 November 24 – FIFA’s last-minute decision to ban alcoholic beer sales at World Cup stadiums could cost them $47 million, with tournament sponsors Budweiser reportedly seeking a massive deduction in its $75 million sponsorship deal after the humiliation of having had their beer concession rights withdrawn by Qatari World Cup organisers.

After initially agreeing to allow alcoholic beer sales in World Cup stadiums, FIFA gave way at the 11th hour to pressure from the Qataris, two days before the tournament started.

As a result Budweiser are now looking for compensation according to multiple reports.

Budweiser has been a major beer sponsor for the World Cup since 1986 and has spent tens of millions of dollars for the exclusive rights to sell its products at the tournament.

The company was originally due to exclusively sell alcoholic beer within the ticketed perimeter surrounding each of the eight stadiums three hours before and one hour after each game.

The u-turn means that apart from corporate areas of stadiums, alcohol can only be sold at fanzones and in hotel restaurants and bars that have licenses.

The last-minute decision has also reportedly led to thousands of Budweiser beer cans being piled up at a warehouse in Qatar.