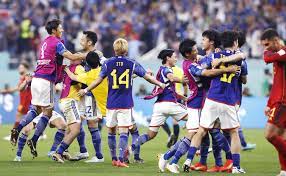 December 2 – Once again, four-time world champions Germany departed the World Cup in the first round despite a 4-2 victory against Costa Rica in their final group E game with coach Hansi Flick saying that a reboot was needed.

On a night of drama, endless permutations and topsy-turvy matches, Germany toppled the Ticos 4-2, the same scoreline of their encounter at the 2006 World Cup, but that was not enough to remain in the competition as Japan engineered a remarkable 2-1 rearguard victory against Spain, a result that dumped Flick’s team out of the competition.

“I don’t care about different teams, it is all up to us. If you look at the matches and number of goals, it is our fault. I am convinced we had sufficient chances and possibilities against Japan in the first half and also against Spain, you have to use your chances. It would have been a different situation,” said Flick.

“There were a lot of individual mistakes and they make me very angry. The first half made me very upset and I told the team I was upset.”

When Costa Rica took a 2-1 lead in the second half, both Germany and Spain were heading home. It would have been a remarkable turnaround for the Latin Americans after their opening day 7-0 defeat against Spain, but the Germans rallied with a brace from Kai Havertz and a late strike from Nicolas Fullkrug, but it didn’t rescue the four-time champions. They went out on goal difference.

Flick said it was time to reassess German football. Four years ago, Germany also departed the global finals. The then-defending champions were dumped out by South Korea.

“I believe that for the future of German football we also need to do things differently with training,” said Flick. “For years we have been talking about new goalkeepers, new wing-backs, what was always good in German football was we were able to defend well.”

“We need the basics. Spain is very good in defence and they focus on training of young players. I think for the future and the next 10 years it will be very important to focus on the new generation of footballers.”