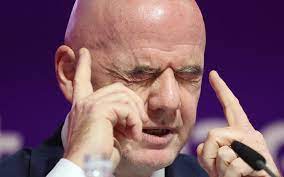 December 8 – In an inhouse interview, FIFA president Gianni Infantino has claimed Qatar hosted the “best group stage ever” at a World Cup with high attendances and record television figures.

“I have seen all the matches, indeed, and put very simply and very clearly, this has been the best group stage of a FIFA World Cup ever. So, it’s very promising for the remainder of the FIFA World Cup,” he said.

“The matches have been of great quality in beautiful stadiums – we knew that already – however, as well, the public who was there was incredible. Over 51,000 on average.

“We already had more than two billion TV viewers, which is incredible. Two-and-a-half million people in the streets of Doha and a few hundred thousand every day in the stadiums, all together, cheering together, supporting their teams, fantastic atmosphere, great goals, incredible excitement and surprises.”

Figures showed a cumulative attendance of 2.45 million for the first 48 games, but there has however been a lot of empty seats at matches with the world federation always announcing the tickets sold and not the actual attendance. He added: “When it comes to stadium attendance, the stadiums are sold-out, full practically at every match. The fan festivals, the different fan zones, are also very crowded with people celebrating and enjoying [themselves].”

Viewing figures have been down in several European countries because of the controversies surrounding the first finals in the Arab world.

However, Infantino has been on a mission to ‘globalise’ the game and Africa, Asia and North America were represented in the last sixteen. The 6-2 bi-continental split between Europe and South America in the last eight of the 2018 World Cup was broken when Morocco eliminated Spain from the penalty spot. The Atlas Lions will have the chance to become the first African team to reach the last four when they face Portugal on Saturday.

“There are no more small teams and no more big teams. The level is very equal. For the first time as well, national teams from all continents going to the knock-out phase, for the first time in history. This shows that football is really becoming truly global,” said Infantino.

The FIFA president has ignored the media since his rambling speech on the eve of the finals, but he has attended the lion’s share of matches, reportedly being helicoptered around Doha. He was also seen meeting celebrity chef Salt Bae again.

Infantino concluded: “At the end [of the day], we simply want to give some joy and some smiles to people all over the world. That’s what football is about, that’s what the FIFA World Cup is about, and that’s what should also happen from now until the end.”