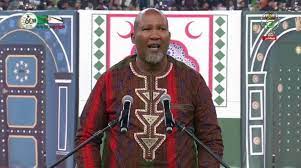 January 16 – Nelson Mandela’s grandson Mandla Mandela has sparked Moroccan outrage and an investigation by the Confederation of African Football (CAF) over his comments “to free” the disputed Western Sahara at the opening ceremony of the African Nations Championship (CHAN) in Algeria.

In a new controversy, exacerbating the political crisis between Algeria and Morocco, Mandela’s grandson said: “Let us fight to free Western Sahara from oppression. Don’t forget the last colony of Africa, Western Sahara.”

Mandela was speaking at the opening ceremony of CHAN at a stadium named after his grandfather in Constantine, Algeria, but his comments sparked fury in Morocco, whose monarchy considers the Western Sahara to be a part of the kingdom.

Algeria however backs the Polisario movement who seek an independence referendum over the Western Sahara.

The Royal Moroccan Football Federation (FRMF) called the statement “provocative” and CAF announced that it “will investigate and look into the political statements and events at the opening ceremony of the TotalEnergies CHAN Algeria 2022,” stressing that the confederation’s position is “to be neutral on matters of a political nature.”

However there was nothing neutral about Mandela’s incendiary address prompting speculation that it was part of a wider political play to split CAF’s member nations further apart as part of a divide and conquer strategy.

In a letter addressed to FIFA president Gianni Infantino and CAF boss Patrice Motsepe, the FRMF and Fouzi Lekjaa wrote that “these statements are unquestionably evidence of an extremely serious, obviously premeditated and totally unacceptable interference of politics in the organization and hosting of the CHAN Algeria 2022…” adding that the remarks “will harm the Kingdom of Morocco”.

The defending champions have boycotted the tournament after Algeria refused Morocco’s request for a direct flight into the country. Since 2021, Morocco and Algeria no longer have diplomatic ties. The Moroccan team did go to the airport in Rabat, but last-minute negotiations ultimately failed to bring a solution.

Infantino and Motsepe were also left grounded at the airport as they had been attending the draw for the Club World Cup in Rabat.

“We can’t have this situation where we have these problems,” said Motsepe. “We’ve got to look at our roles, look at our laws and it’s key (for) football in Africa people stop seeing us as having some rules we don’t adhere to and we change them all the time.”

“We have to be professional, we’ve got to be ethical. Everybody must comply with our rules and say to Africa and the world that we are serious about African football being amongst the best.”

In his letter Lekjaa says: “These statements, which are intended to be violent and whose highly political nature is irresponsible, (i) have no connection whatsoever, either directly or indirectly, with a sport competition such as the CHAN Algeria 2022 nor, more generally, with football, (ii) were made by theirauthor with premeditation as part of a staged play that was obviously orchestrated in advance, and (iii}target directly and exclusively the Kingdom of Morocco. »

Lekjaa goes on to demand: