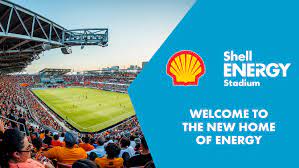 January 18 – MLS club Houston Dynamo have unveiled a new stadium naming rights deal ahead of the start of the 2023 MLS season.

Centrally located in downtown Houston, the 21,000-capacity soccer-specific stadium will be now be known as the Shell Energy Stadium. It was previously known as the PNC Stadium.

The stadium is also home to the NWSL’s Houston Dash.

Houston has a powerful base of corporates in the energy industry. The club and Shell Energy said they would introduce a variety of integrated energy and decarbonization solutions at the stadium, including a near-term goal to reduce the club’s greenhouse gas emissions by 50% by 2026 from a 2018 base year.

“On behalf of the club, we are ecstatic to not only expand our relationship with Shell Energy, but combine efforts to truly impact the city of Houston through an array of community and sustainability projects,” Dynamo majority owner and chairman Ted Segal.

The stadium will have new marquee signage at the north end, along with Shell Energy signage and branding throughout.

The stadium is currently undergoing a number of upgrades with an expansion of its premium hospitality offering with an all-inclusive air-conditioned club on the east concourse. Improvements also include the installation of all-new mesh seats throughout the entire seating bowl.

For the 2021 Concacaf Gold Cup Houston was a key hub with the Dynamo’s stadium hosting a number of group games. Houston and its 72,000 capacity NRG Stadium has been chosen as one of the host venues for the 2026 World Cup.

No value or term was given for the Shell Energy naming rights deal.