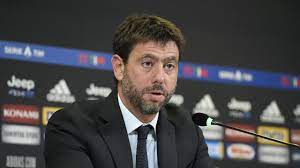 January 19 – Former Juventus chairman Andrea Agnelli, one of the chief architects of the doomed European Super League, has reiterated his belief in the project in a farewell speech at the Italian giants.

Agnelli and the rest of the Juventus board dramatically resigned en masse in November amid an investigation into the club’s transfers.

Prosecutors in Turin have requested that Agnelli, 11 other people and the club stand trial over allegations of false accounting. Juventus, the most decorated club in Italian history, has repeatedly denied any wrongdoing.

In a parting shot after more than a decade in charge, Agnelli said reform was badly needed to counteract the power of the English Premier League.

“I believed and still believe that European football needs structural reforms to tackle the future,” Agnelli, not so long ago one of the game’s most powerful officials at head of the European Clubs Association and a UEFA executive committee member, told Juventus shareholders.

“Otherwise we are heading for inexorable decline in favour of a dominant league, the Premier League, which over a few years will attract all the European talent and marginalise the others.”

Juventus, Barcelona and Real Madrid – three of the original ESL backers – are still sticking to their argument that UEFA and FIFA broke European Union competition law by blocking its creation.

This is despite a report released by the European Court of Justice in December, in which advocate general Athanasios Rantos said UEFA and FIFA’s actions were “compatible with EU competition law”.

A final ruling will be made by a 15-member Grand Chamber next spring.

“When I was president of the ECA and on the UEFA executive committee, the analysis was evident,” Agnelli continued.

“There was no club sustainability, a vertical polarisation of interest towards only two leagues, access to very risky financial instruments and fan disaffection.

“The hope is that the European Court of Justice recognises professional sport as an industry, since the turnover of football is €55 billion.

“I thank Real Madrid and Barcelona who, together with Juventus, had the courage to face the threats from UEFA.”