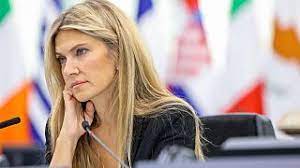 January 20 – The former vice-president of the European Parliament Eva Kaili (pictured) will remain in prison for at least another month after a court rejected her plea to be released with an electronic tag.

Kaili and her lawyers, meanwhile, claim she faces inhumane conditions in prison.

Kaili is at the heart of Qatargate, a scandal that has rocked the European Parliament with the 2022 World Cup host nation allegedly bribing members of the European institution to shed a positive light on the country.

The Greek’s request to be released pre-trial was however again rejected. Kaili is being held on preliminary charges of corruption, money laundering and participation in a criminal organisation, but she maintains her innocence. Via her layers, she has denied the charges.

On the defensive, her lawyers claimed that Kaili was facing ‘torture’ in prison. In a statement Michalis Dimitrakopolous said outside the Brussels court: “From the afternoon of Wednesday January 11th to Friday January 13th, Eva Kaili was placed in solitary confinement on decision of the investigating judge. She was held for 16 hours in a police cell, not in prison, in the cold, she was refused a second blanket. They took her coat, the light was constantly on not allowing her to sleep, she had her period with a lot blood and wasn’t allowed to wash.

“This is the Middles Ages, this is torture,” said Dimitrakopolous.

Her lawyers also said that they were not informed why Kaili was placed in solitary confinement. André Risopolous, her Brussels-based lawyer, explained: “At the moment, the defense has no other lead than to say that the judicial authorities found that it was probably a good way to avoid [interference] while Mr. Panzeri was negotiating his own repentance procedure.”

Earlier this week, Pier Panzeri struck a plea deal with Belgian prosecutors. Panzeri has reportedly agreed to disclose the names of those he admits to having bribed. He will receive a limited sentence including jail time, a fine and confiscation of assets he acquired as part of the scheme, estimated at €1 million.