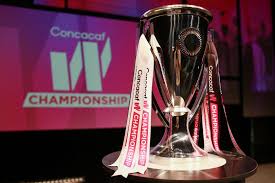 June 24 – Every match from the Concacaf W Championship in Monterrey, Mexico, will be streamed live on Paramount+ with a number of games simulcast on sister network CBS Sports.

The highlight of the coverage of the eight-team finals – the top national team event for Concacaf teams and which will feature World Champions USA and Olympic Champions Canada – will be on-site studio coverage of the semi-finals and final from Monterrey.

Paramount+, and CBS Sports have put together a predominantly all-female presenting, analysis and commentary team for the championships.

Poppy Miller, along with Briana Scurry, Kaylyn Kyle and Janelly Farías, will serve as studio analysts. The Semi-finals and Final will be led by Lisa Byington in commentary, with Aly Wagner as analyst. Jenny Chiu will serve as the sideline reporter for the matches.

The final will be played on July 18 at Monterrey’s Estadio BBVA, one the venues confirmed last week for the 2026 World Cup.

The W Championship is the first major competition in Concacaf’s makeover of its women’s national team competition structure that is designed to create more meaningful matches for the region’s leading teams as well as a clear competitive development platform for nations that are in the earlier stages of building their women’s programmes.

The new women’s competition programme will also include the launch of a Women’s Gold Cup in 2024 that will see leading national teams from outside the Concacaf region invited to compete against Concacaf’s elite.

The 2022 W Championship will qualify four teams for the Women’s World Cup Australia and New Zealand 2023 with the winner also qualifying for the Paris 2024 Summer Olympics.

The third placed teams in each of the two groups of four, will qualify for a 2023 World Cup Intercontinental Playoff.

At the 24-team, 2019 Women’s World Cup in France, Concacaf had three representatives; USA, Canada and Jamaica. At the expanded 32-team 2023 World Cup, if their two teams win their inter-continental play-offs, Concacaf could have six.

The eight nations at the W Championships will play as follows: