Haiti stormed through their qualifying games scoring 44 times in four games and not conceding a single goal. Cuba and Honduras managed to keep the goals against down to six while St Vincent and the Grenadines and British Virgin Island shipped 11 and 21 goals respectively.

Issy Les Moulineaux forward Roselord Borgella hit the back of the net 11 times while her teammate in France Batcheba Louis scored eight.

However Montpelier striker Nerilia Mondesir, 23, is Haiti’s class act up front, having scored 21 goals, (only two goals in three games in CWC Qualifying) in 12 games. She was part of the Haiti side that reached the Final of the 2014 Concacaf Women’s Under-15 Championship in the Cayman Islands, scoring six goals to take home the Golden Boot from that competition. She had another Golden Boot performance, as well as Best XI honors, at the 2016 Concacaf Women’s Under-17 Championship, scoring 12 goals, including six in a match versus Aruba and five against Grenada. At the 2018 Concacaf Women’s Under-20 Championship in Trinidad and Tobago, she scored four goals in four matches, helping Haiti qualify for that year’s FIFA Under-20 Women’s World Cup in France – the first time that a Haitian Women’s National Team at any age level had qualified for a World Cup. 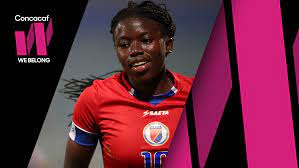 Haiti hit world headlines with the institutionalised sexual abuse of its women’s players at its training centre. The scale of the abuse was horrific. The power with which Haiti set about their qualifying was impressive and they go into the tournament with the potential to create an upset and qualify for the 2023 World Cup. They open against favourites the USA before facing what will be their tournament deciding games against Mexico and Jamaica.