The US Womens’ national team, popularly branded ‘USWNT’, qualified automatically for this summer’s Concacaf W Championship, although their glittering reputation as the reigning World Champions would suggest they would’ve had very little difficulty securing their place in the group stages of a competition they are more than familiar with. They have been ranked the world’s number 1 team since 2018.

USWNT’s Concacaf W Championship record is outstanding, perhaps the most dominant football team in the world in their category. Since the competition’s conception in 1991, USA have lifted the trophy eight times out of a possible ten. They are comfortably the most decorated squad headed into this year’s rendition of the tournament, which kicks off on the 4th of July: potentially giving the American public even more to celebrate.

USWNT boast a star-studded roster, including 2019 Ballon do’r Feminin holder Megan Rapinoe. That being said, serial goalscorer Alex Morgan is our pick for star player: with 160 goal involvements in 191 games, she is a great blend of experience and explosiveness that can be the difference in tight games late on in the tournament. Despite a largely unsuccessful stint in the FA Women’s super league for Tottenham Hotspur, her reputation on the international stage is ferocious. She currently captains San Diego FC and is in the best club-form of her life: 11 goals in 10 games. 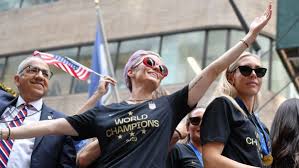 Midfielder Lindsay Horan (USWNT athlete of the year 2021) and Winger Rapinoe  are other top picks and will surely feature prominently in USA’s trophy ambitions.

The Macedonian-American failed to successfully launch his playing career after stints as a central defender in the Macedonian football league. He turned to American indoor football in 2000 and was much more at home, even becoming the MISL’s most valuable player in 2005. Despite this, his managerial career has comfortably eclipsed his playing achievements, as he has lost a measly 6 games out of 41 since his unveiling as USWNT manager. This upcoming tournament will be a big test for Andonovski, as his side are expected to go deep into the competition. The pressure rests upon him to deliver on the continental stage.

It is no secret that USA are royalty amid Concacaf opposition. With an immaculate record and an exciting squad comprised of proven experience and fresh-faced talent, they are the favourites to lift the title for the ninth time.