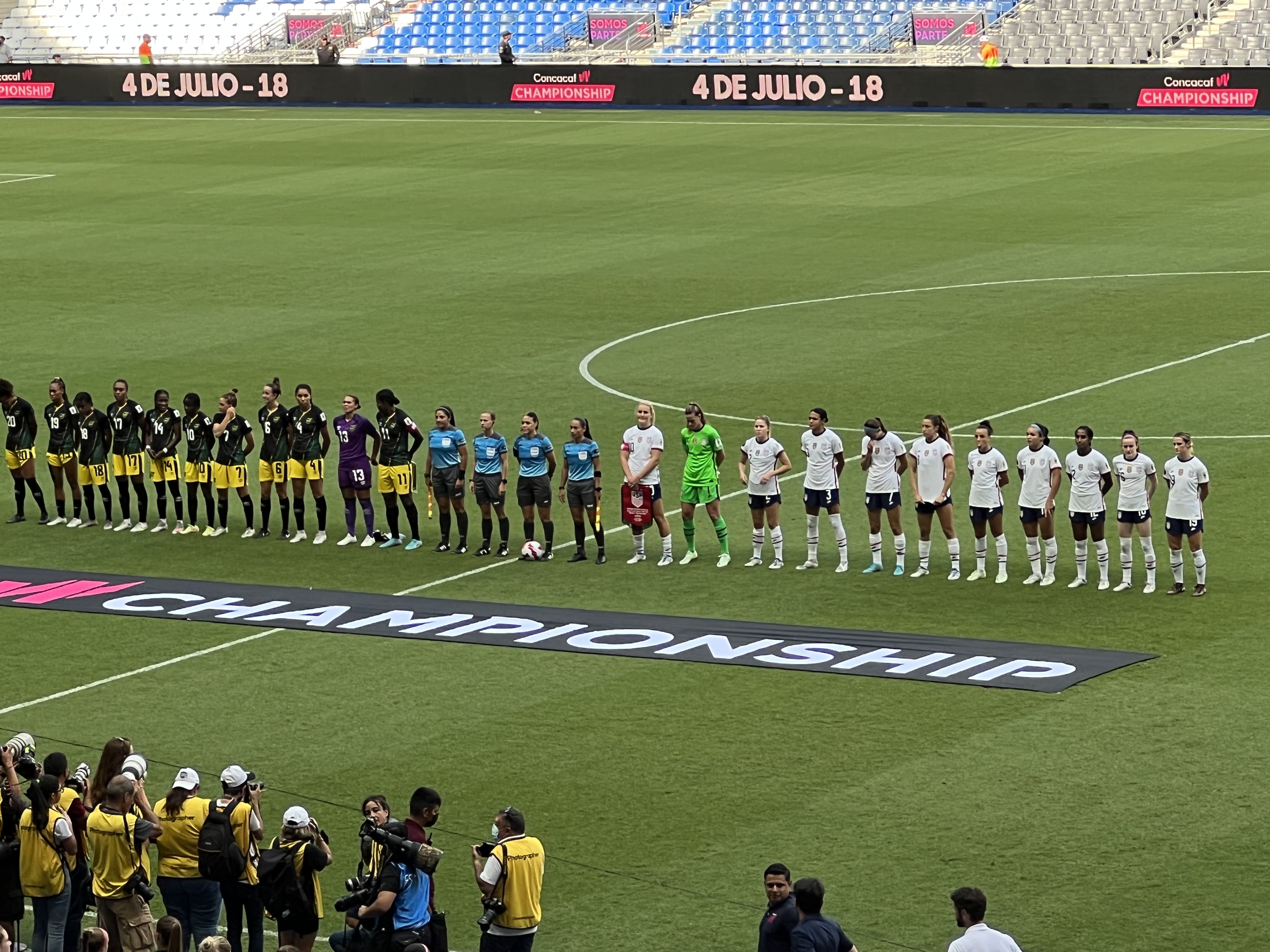 July 8 – The US and Jamaica went into their second group game knowing that a win for either would virtually guarantee them progression to the semi-finals and a spot at the 2023 World Cup.

The US turned on the power to push past a defensive Jamaica 5-0, blood a number of players and introduce their latest starlet Trinity Rodman to the world of big tournament women’s international football

US coach Vlatko Andonovski made eight changes from the team that beat Haiti 3-0 three days ago, leaving out captain Becky Sauerbrunn and star striker Alex Morgan. In came a clutch of youth with the captaincy passed on to Lindsey Horan to martial the team from centre midfield.

Jamaica made just two changes from the team that pulled off a surprise 1-0 win against Mexico.

The US wasted no time in imposing themselves on the Jamaicans.

In the 4th minute Sofia Smith beat her defender on the right hand side and angling in on goal curled the ball beautifully off the outside of her foot round Jamaica’s keeper. The Portland Thorns striker had a second on 8 minutes when she got on the end of a through ball to lift it over Spencer. 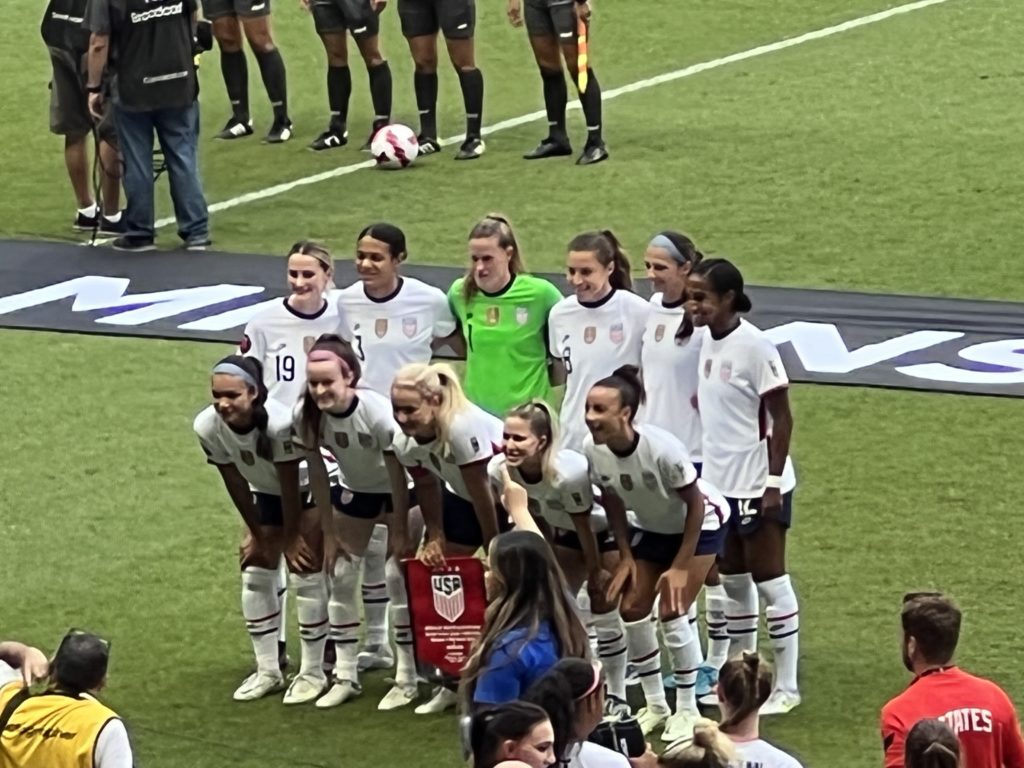 The US could have been up three up on 10 minutes when Lindsey Hatch got on the end of mix up in the Jamaica area to hammer home, only for it to be rule offside.

Bob Marley’s Three Little Birds had boomed out pre-match with the ‘Don’t Worry’ message but the Jamaican defence were ruining the moment and showing a lot to worry about with nothing being alright.

US pressure in the Jamaican final third made it difficult for the Reggae Girlz to find a rhythm or prolonged periods of possession.

Two minutes later the US were denied their third when a Sofia Huerta cross from the right was volleyed in by Ashley Hatch, only for VAR to rule out the goal.

It was a half that ended 2-0 but saw a procession of missed US chances. Jamaica’s Khadija Shaw was a threat but limited, too often being pushed wide where she couldn’t use her physical presence to greatest effect.

The second half started as the first half finished with the US dominating. In the 48th minute Chicago Red Star striker turned Mallory Pugh turned her defender and hit the post. A minute later Lindsey Horan headed inches wide.

On 58 minutes the US had their third. An attack on the left saw Ashley Sanchez slide the ball across goal for Lavelle to fire home, a fair reward for her tireless running in 80+ degree heat.

With half an hour left to play Andonovski brought on the latest US starlet Trinity Rodman. 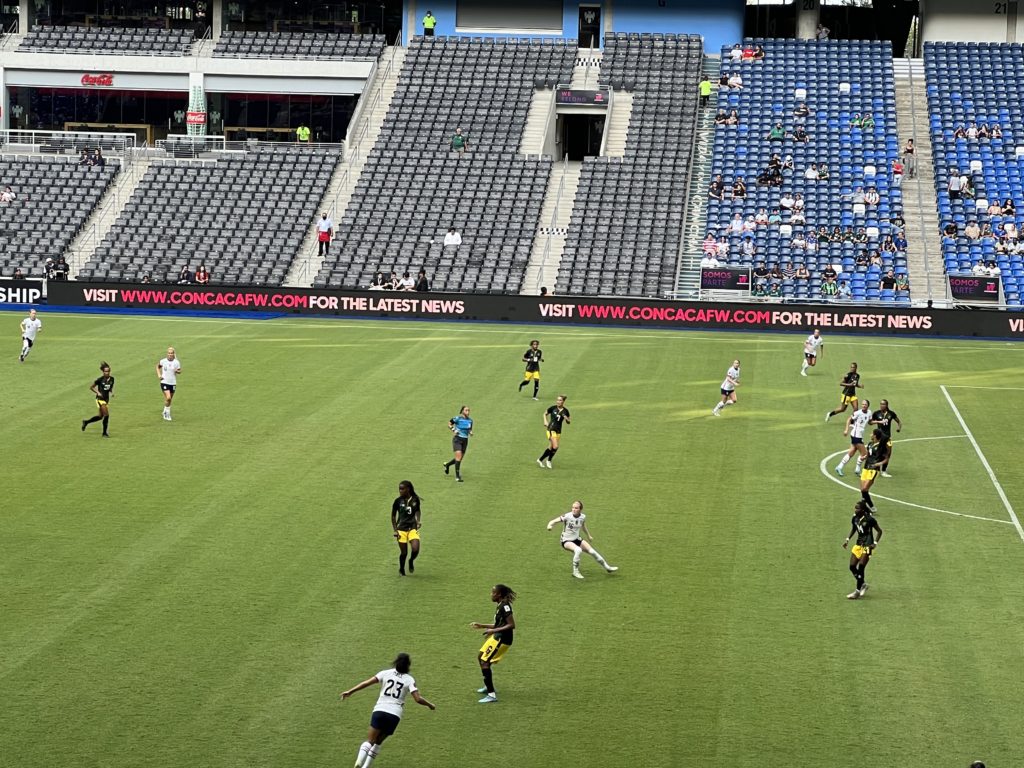 The US continued to attack. On 68 it should have been four but Spencer saved diving to her right from Pugh.

In the 82nd minute Margaret Purce was brought down in the box by Paige Bailey-gayle. Kirstie Mewis fired home from the spot to make it four.

In the 86th minute it was five and all the hype around Rodman was there to see. Her speed through the middle left Jamaica’s defence standing as she calmly latched on to a cross to beat Spencer. It was her second goal in five appearances for the US. On this showing there will be a lot more.

The US  showed a progression from their first game and move into the semi finals with their reputation enhanced. They scored five and it could have been more. They dominated with 61% of possession but it felt like more.

Jamaica won’t be too worried about the defensive workout they were given, and every little thing could still be alright.

They rode their luck in terms of the scoreline but as they game progressed their shape tightened and coach Lorne Donaldson used his bench well to bring more energy to the Jamaican midfield.

Their big game comes on Monday when they face Haiti. A win will see them into the semis and their second successive World Cup finals.