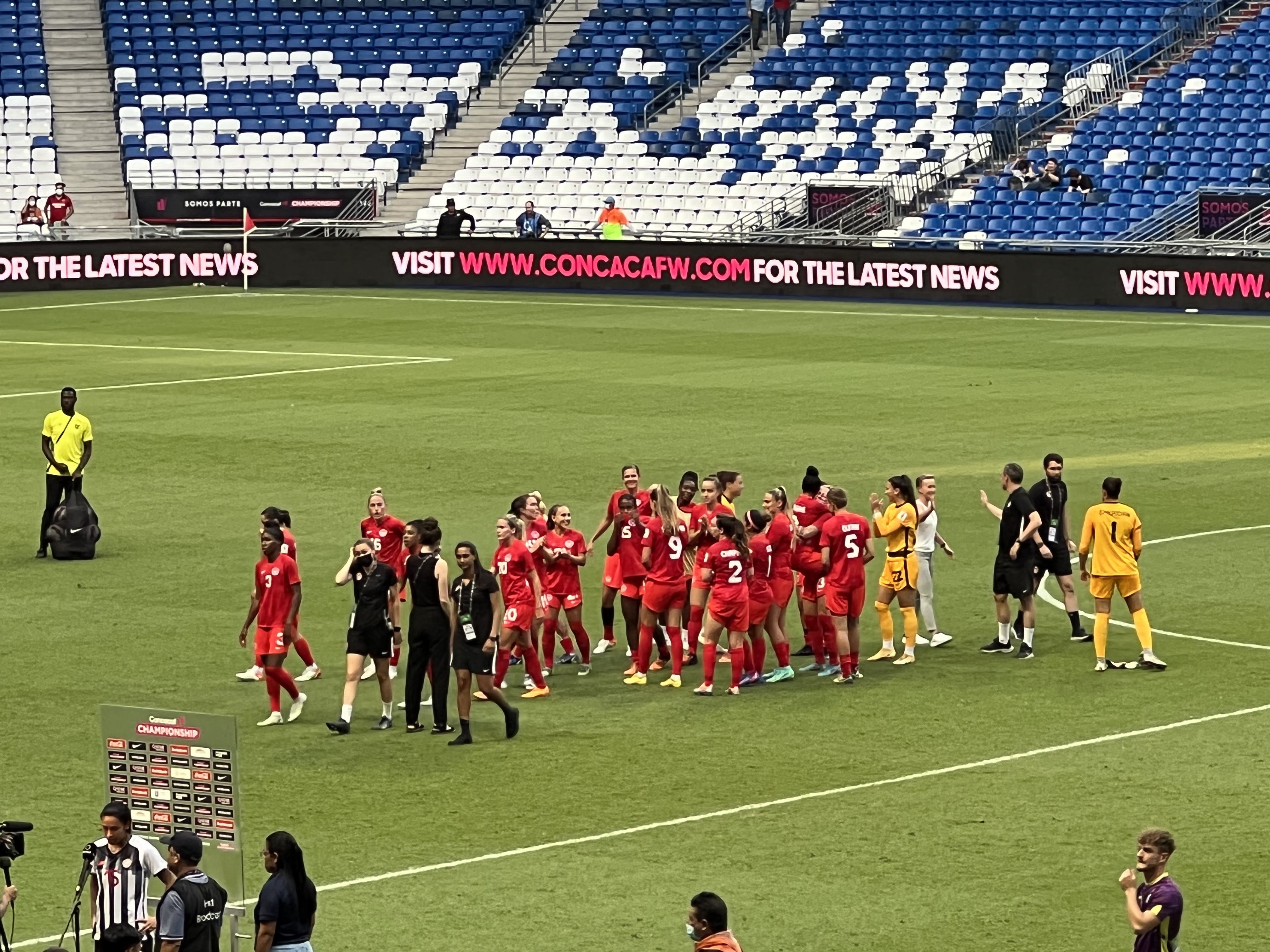 July 11 – Canada delivered a 2-0 win over Costa Rica in their final group game on a hot and sticky evening in the BBVA Stadium in Monterrey to secure top spot in their group and miss meeting the USA in the semi-finals later this week.

It was another convincing win from the Canadian Olympic Champions who didn’t convert  all their opportunities into goals but did show they can break down a stubborn back five defensive line. Costa Rica competed, but rarely threatened. The danger for them is that they will be feasted on in the semi-finals by the power of the US juggernaut.

Canadian coach Bev Priestman made four changes to the starting line-up that from the Panama 1-0 win. Costa Rica’s Amelia Valverde, who kept her starting 11 the same in both their opening matches, only making one change for this match, bringing in Daniel Solera. 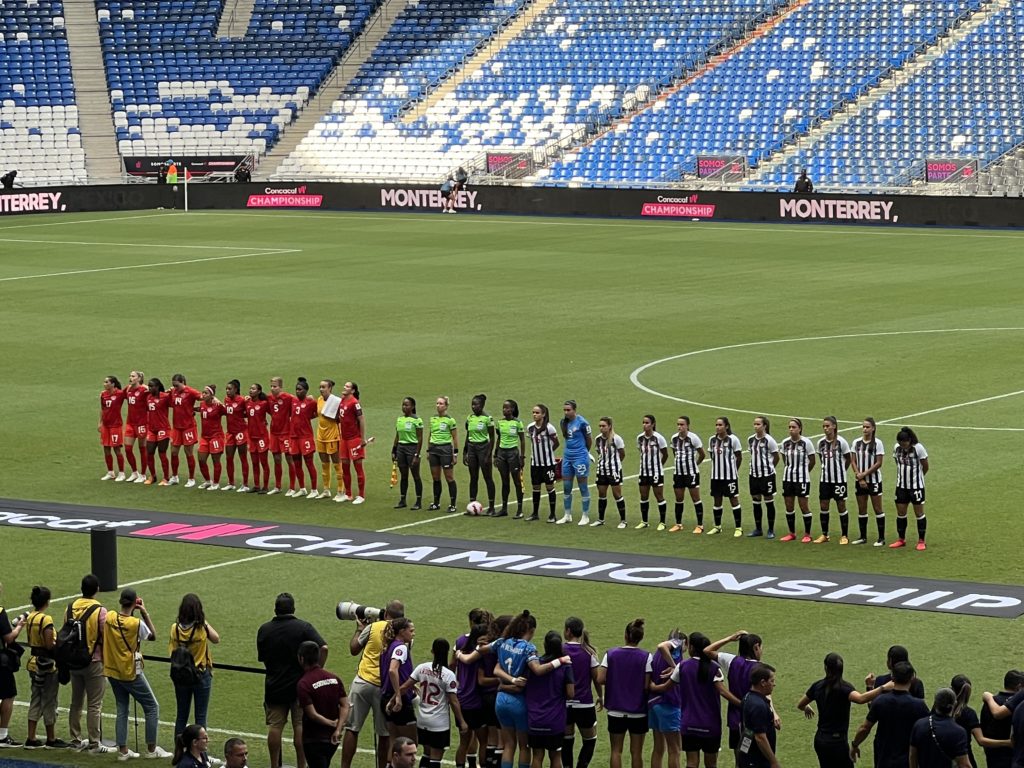 Before the game Priestman had talked about her team needing to find a rhythm, having been frustrated by a Panamanian team who stopped the game at every opportunity.

Canada started the brighter of the two teams with Janine Beckie heading wide after two minutes, Vanessa Gilles headed a corner over a minute later.

On 4 minutes Canada had the fast start they were looking for. Jessie Fleming was put through to calmly beat Costa Rican keeper Daniela Solera. They should have been two up on 10 minutes but Nichelle Prince, 3m out, could only side foot the ball into Solera’s legs.

With almost total control of possession in Costa Rica’s half, Canada started to create chances. On 22 minutes Beckie, a persistent threat driving in from the right, should have done better with a ball she lifted over Solera and her goal. She did the same at the end of half, latching on to a loose ball on 6m but blasting over.

It was the story of the half. Canadian control created opening after opening but the final ball was agonisingly not quite right or the killer blow was lacking.

With the score 1-0 at half time, Costa Rica, having played most of the half on the back foot, were still in the game. 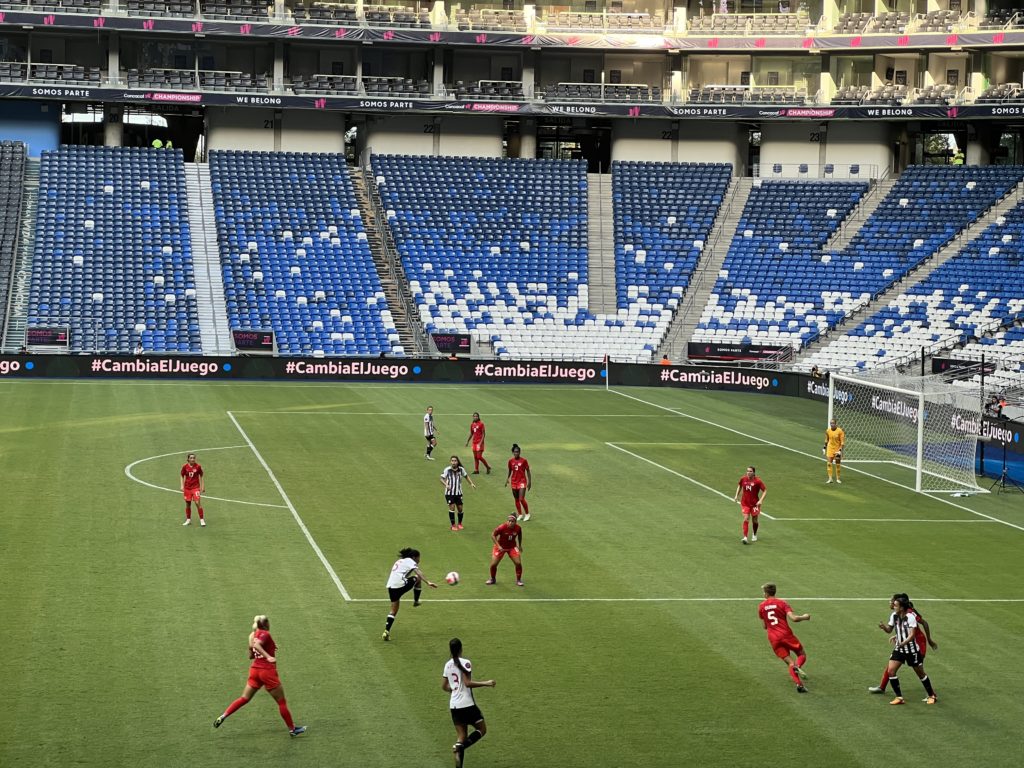 Priestman changed her forward line at the start of the second half, bringing on OL Reign’s Jordy Huitema and West Ham’s Adriana Leon. Leon brought more attacking options on the left but there was still no finisher to be found in the middle.

With temperature still in the high 80s, Costa Rica found a passage of play that questioned Canada’s control of the game. But not for long.

On 68 minutes Carol Sanchez had a shot from outside the box collected by Sheridan who immediately launched Canada back up the other end where the ball eventually found midfielder Sophie Schmidt with enough space in the box to curl her shot in off the right hand post.

It should have been 3-0 on 84 minutes with Huitema missing a 1vs1 on one with the goalkeeper and the rebound hitting Leon and then on to the post. Huitema failed again on 87 minutes, tamely mis-hitting the ball into Solera’s hands.

It was that kind of night. At some point the margins that are currently falling on the wrong side for the Olympic champions will fall on the right side.