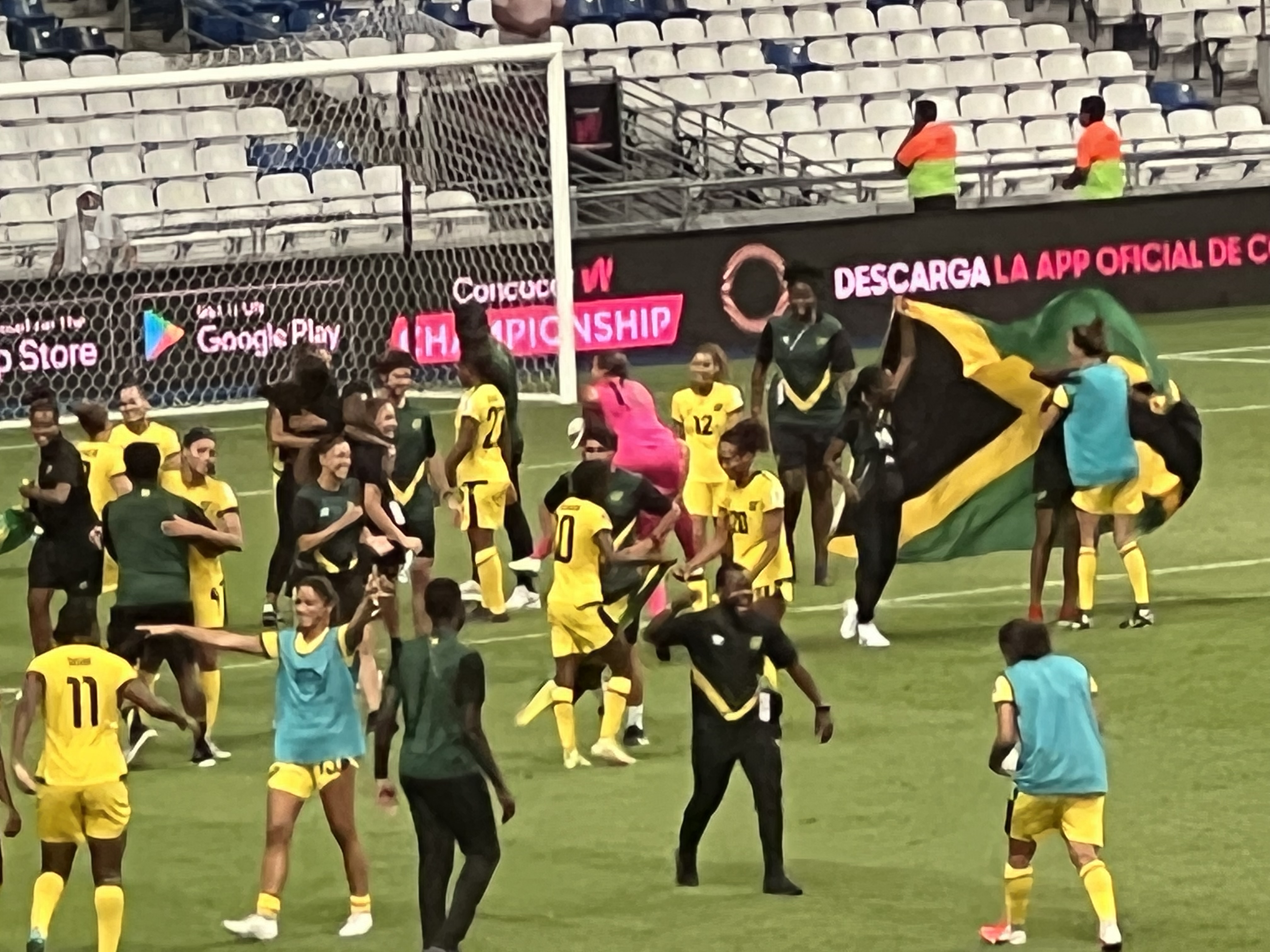 July 11 – Jamaica secured an automatic slot at the 2023 World Cup with an emphatic 4-0 win over Haiti at the BBVA Stadium in Monterrey.

Jamaica have qualified for their second consecutive World Cup and in the Concacaf W Championship now move to the semi-finals later this week where they meet Canada.

It was a significant achievement for Jamaica who under Lorne Donaldson have looked structured and disciplined. Jamaica were surprise qualifiers in 2019 and few gave them much hope of getting out of their group here, being drawn with the US, Mexico and Haiti.

But underestimating  the Reggae Girlz is a mistake. They opened with a surprise win over hosts Mexico with a goal from their talismanic captain and centre forward Khadija Shaw, and never really looked back. 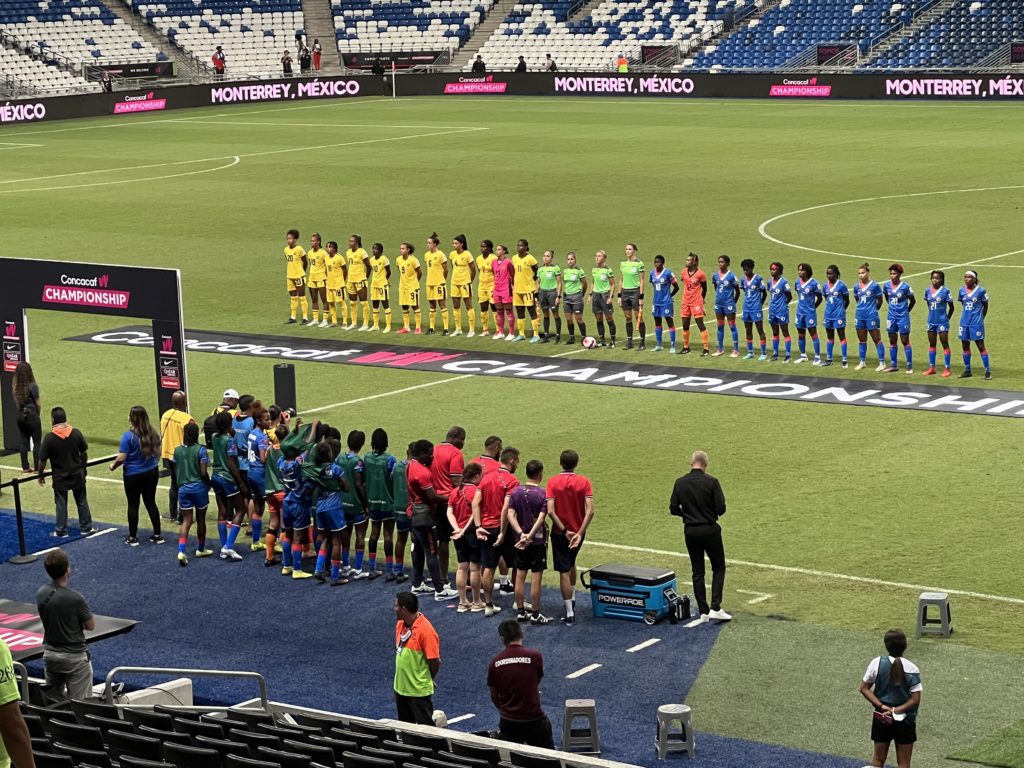 Shaw scored twice against an energetic Haiti to emphasise her threat and drive her country towards the Australia/New Zealand finals next year.

The match, played in near 90 degree heat, opened at pace with Melchie Dumornay, the dynamo behind much of Haiti’s forward movement, in the third minute showed the threat she creates sweeping across goal to the right and delivering a low cross just behind her incoming forwards. It was a sign of things to come for the Haitians who could never quite make the final ball in the box count against a well organised Jamaican back line.

The first real chance if match fell to Jamaica’s Manchester City striker Shaw who received the ball with her back to goal, turned her defender only to have her shot pushed round the post Haiti keeper Nathonie Ambroise. Chantelle Swaby headed the corner over.

It was end to end. On 11 minutes Dumornay broke at pace from half way and fired into Spencer’s left post. 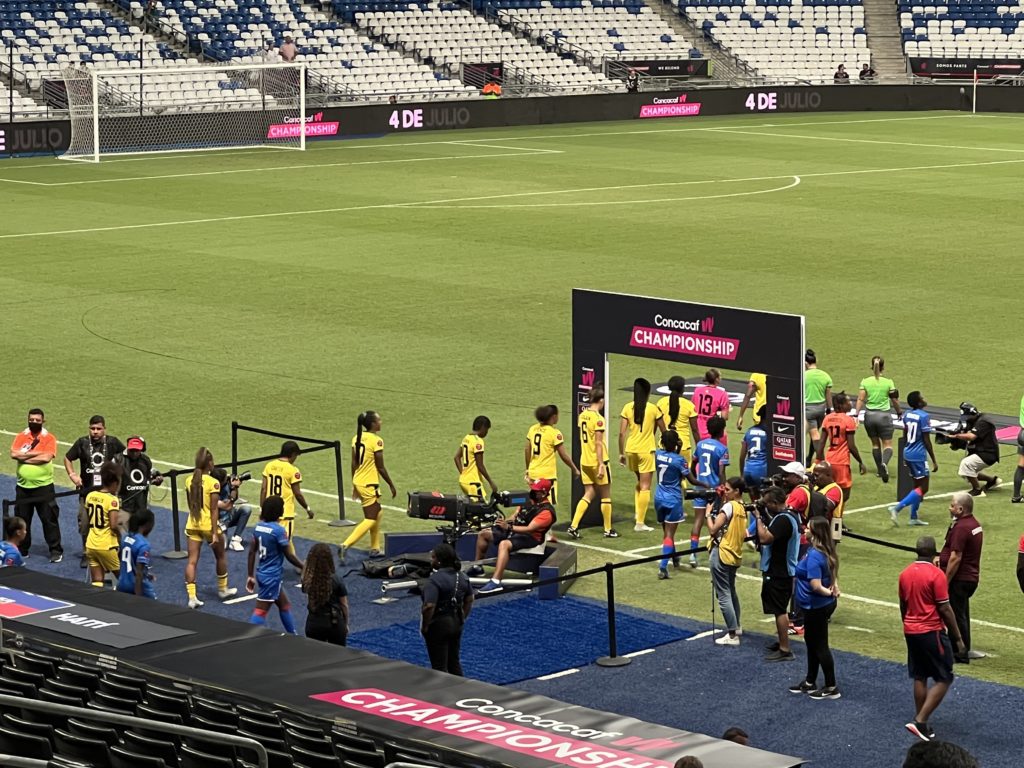 The better chances were falling to the Reggae Girlz. On 22 minutes a free kick swung in from the right by Trudi Carter was volleyed into the ground by Shaw only for the ball to bounce comfortably into Ambrosie’s hands.

On 25 minutes Jamaica got their deserved breakthrough. Shaw pushed the ball through to a forward running Carter on the right who stroked it past Ambrosie.

The goal brought Haiti to life. On 29 minutes Batcheba Louis drove into the box but sidefooted wide under Jamaican pressure. Dumornay upped her intensity, pressuring higher up the field. Racing Louisville’s Satara Murray in the centre of Jamaica’s defence matched her pace and the intensity.

Shaw was the sharp point of the Jamaica attack and on 42 minutes drove to the right of the Haiti defence only to have her pass to incoming runnners blocked. Haiti countered but Nerilia Mondesir’s shot went wide.

The half ended with Jamaican pressure and a 1-0 lead.

The second half began with Haiti on the attack. On 48 minutes Atlanta Primus blasted over from a corner. On 52 minutes Haiti’s top scorer Roselord Borgella found herself free on the right only for her shot across goal to slide past Tottenham Hotspur keeper Rebecca Spencer’s left post.

But it was Jamaica who scored with a piece of individual striker’s brilliance by Shaw. With the ball at her feet on the edge of the box she played a one-two with Havana Solaun, moved to the right and fired in from 18m to Ambroise’s right.

Four minutes later Haiti almost pulled one back when Dumornay hammered a shot from outside the post that a diving Spencer pushed on to the post. Two minutes later Spencer was in action again, pushing wide from Louis.

But it wasn’t going to Haiti’s night. Jamaica had a third on 69 minutes. A handball by Clare Constant in the area left Shaw to score her second of the night from the spot, hammering the ball past Ambroise’s left.

On 78 minutes Jamaica had a fourth. A free kick on the right from Carter found the head of Drew Spence who head back across goal and over Ambroise.

Haiti have the consolation of another shot at qualification via the inter-confederation play-off tournament in New Zealand next year. On the performance here they have a good shot. The World Cup will be a much better event with a player like Dumornay.