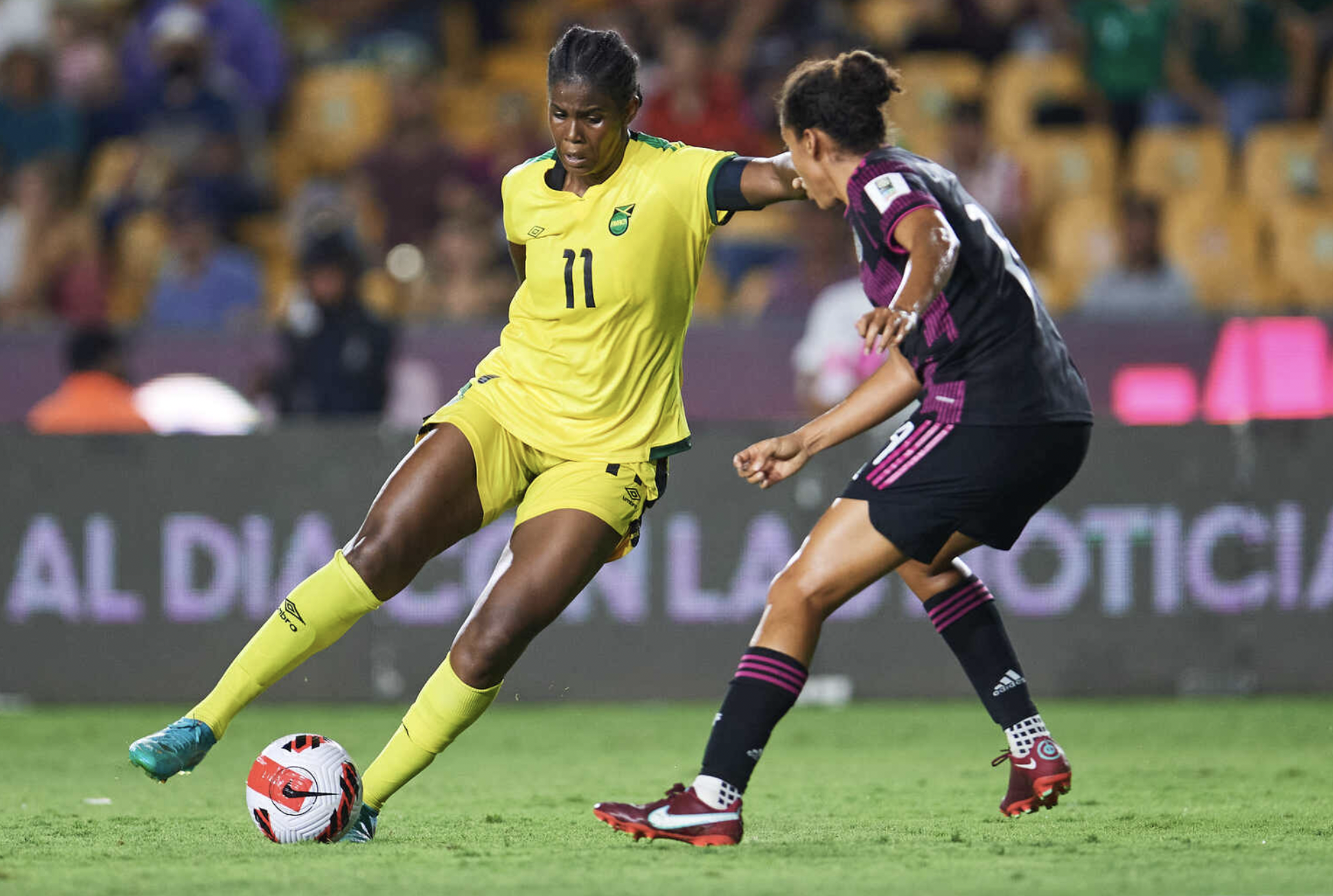 July 14 – Jamaica made Caribbean football history when they became the first men’s or women’s team from the region to qualify for two World Cups, and having tasted that success they are saying they want more and believe they can go deeper into the Concacaf W Championship.

Jamaica face Olympic champions Canada tonight in the semi-finals at the Estadio Universitario in Monterrey off the back of a winner-takes-all 4-0 dismantling of Costa Rica. Canada go into the match yet to concede a goal, having scored nine themselves.

In Jamaica – who Canada have never lost to – they know they are up against a very different opponent than they faced in their group games and they are not under-estimating the threat Jamaica pose.

“The Jamaica we played in 2010 is not the Jamaica we play tomorrow. They have recruited WSL players who play at a high level every week. With Khadija Shaw (pictured) they have a big threat who scores week in week out for Manchester City,” said Canada coach Bev Priestman. Shaw has scored three times in three games in Monterrey.

“We will bring our style that allows us to have more of the ball. We will focus on what is in front of us,” said Priestman.

While she is getting her team focussed, there has been the off-field distraction of the players essentially issuing a vote of no confidence in their federation over an on-going negotiation over World Cup payments.

Not allowing that distraction to affect their performance will be important for a team that says it has an ambition to go take a big step beyond their Olympic gold at the 2023 World Cup in Australia/New Zealand.

Canadian midfielder Quinn told a pre-match press conference: “The expectation in this team has risen. From the initial bronze medal at the 2012 Olympics we have put more pressure on ourselves and the challenge is to be at the top of the world.”

Jamaica have had their own challenges with a fractured pre-tournament build up with Lorne Donaldson only taking over in June after the team approached the Jamaican federation asking for their coach to be removed.

“Obviously it is never a smooth ride and we face challenges and obstacles. The important this is we stuck together. The women on this team have had each other’s backs. The way we stick together gets us through,” said Kayla McCoy who plays her club football with Rangers in Scotland.

“We are still hungry to win more games and make a name on the world stage. We go into this game hungry and will see what we can do with it.”

Jamaica’s women would not have got this far without the support of Cedella Marley, a fact acknowledged by both Donaldson and McCoy.

“Cedella (Marley) has been a massive part of the programme. Even before we started having success. As individuals and as people we wouldn’t be here without her,” said McCoy.

Donaldson said the mood in the camp was understandably good. “The girls qualified and there is more at stake and we want to get more out of this tournament.”

Key to getting more looks likely to be the depth of both team’s benches.

“We have played some good stuff and we leave it all on the field,” said Donaldson.

A core attacking strength of Canada is that they are strong on both wings. “Canada will try to get behind us but we have to combat that. We have to match their football and their fitness,” said Donaldson. “They have a deep roster.”

Jamaica have been improving every game while Canada have dominated matches but by their own admission have not turned all their chances into goals. Canada have yet to be properly challenged defensively and in Shaw Jamaica have the most imposing centre forward in the competition.